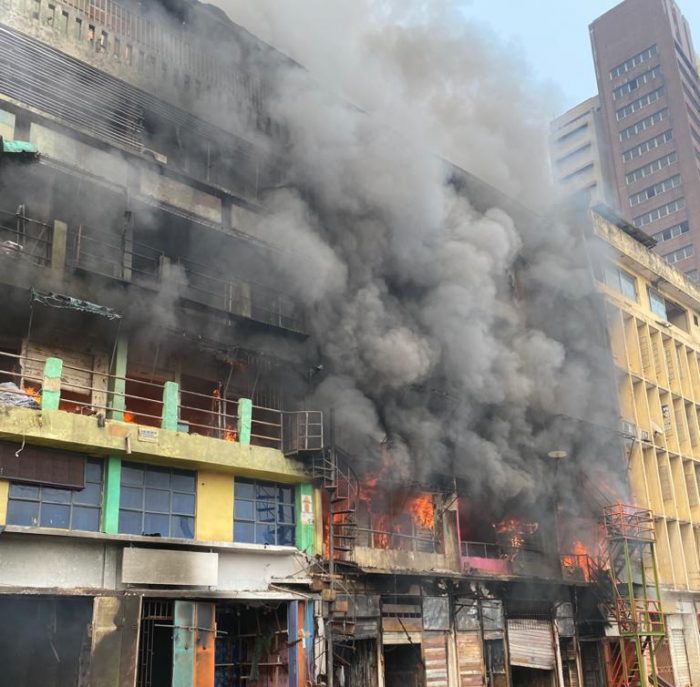 A building in Balogun Market on fire

Being a cosmopolitan city and the commercial nerve center of Nigeria, incidence of occasional fire disaster should not entirely be a strange thing in a place like Lagos. However, the spate of fire outbreaks recorded in the metropolis in recent time is becoming quite alarming.

Therefore, considering recent spate of fire occurrence in which billions of Naira worth of goods and property were destroyed in Lagos State, it has become extremely essential for all and sundry to pay immense attention to safety issues.

It will be recalled that barely two weeks after the sordid Abule-Egba pipeline fire incidence that threw drew both local and national attention, the popular Amu Plank Market in Mushin, Lagos, also recorded another distrarious fire outbreak that resulted in colossal loss of goods and properties. Just as the state government and the people were grappling with this unfortunate occurrence, the famous and ever bustling Balogun market in Lagos Island was also engulfed in fire.  Many are yet to really come to terms with the monumental losses they have incurred as a result of the tragic event.

This development is bothersome, bearing in mind its effects on socio-economic life.  The price of fire incidents is apparently huge. It results in pains and deaths to victims, loss human and material resources as well as damages to equipment and structures.  It is, therefore, discouraging to note that most of these disasters are not acts of God, but rather the products of human errors and carelessness. For instance, the fire episode that once killed a family of seven, in Lagos in 2015, was reportedly caused by candle light which was not put off at night. Risky acts such as storing of petroleum products at homes and reckless use of cooking gas are common causes of fire outbreaks in our society. Storing of petroleum products at home is especially a sheer act of inconceivable thoughtlessness that must be discouraged.

Equally, many people close at work or leave home without ensuring that all electrical appliances are shut down to prevent outbreak of fire in case of power surges. It is also dangerous to keep matches and other ignition materials within the reach of children. Other causes of fire outbreaks are careless attitude towards electrical outlets, faulty electrical wiring, damaged electrical appliances, heating gadgets, unattended stove and gases, uncontrolled children’s attitudes towards inflammable materials among others.

To stem the tide of further fire disasters in the state, it has now become crucial for all offices and homes to have efficient fire extinguishers. This is in addition to having functional knowledge of their usages. It is also imperative for everybody to acquire safety information in respect of fire outbreaks. We all need to be aware that fires could generally be put off by water or sand while a special foam chemical could be used to quench oil fire. People using gas for domestic or industrial purpose need to be more vigilant. Ovens and stoves should be shut off to prevent outflow of inflammables and food flaming.

Motorists, chiefly drivers of articulated vehicles, should be more safety conscious while driving tankers with inflammable products. Ideally, drivers of articulated vehicles ought to be careful and extremely cognizant of the damage any slip on their part could cause in terms of human and material losses. But then, findings have shown that several carnages recorded on Lagos roads which resulted in fire disasters, causing needless losses, have been caused by their complicity.

Additionally, well-meaning individuals, related government agencies and organisations need to embark on fire safety and emergency management. With the level of painful losses experienced as a result of needless fire outbreaks in the State, it has now become decisive for all stakeholders including religious bodies, corporate organisations, schools’ owners, community leaders, Public Servants, political leaders, traditional rulers, NGOs and individuals across the state to toe the path of safety in their daily activities.

Enlightenment advocacy on fire prevention and management must not be left in the hands of government alone. Everyone must be involved. Consequently, every adult resident must educate young ones on all safety measures in order to reduce to the barest minimum the incidence of fire in the state.

A research conducted by a non-governmental organisation with focus on fire prevention, control and management, Fire Disaster Prevention and Safety Awareness Association of Nigeria (FDPSAAN),  shows significant low level of awareness on fire safety in Nigeria. Less than 2% of the over 140 million Nigerians have the required basic fire safety knowledge.

The issue of safety which once occupied a major place in the programmes and plans of every level of government is now treated with levity. Within the context of Nigerian laws on safety, the National Fire Safety Code, for instance, seems to have been dumped in the thrash-can. The code is a set of rules guiding fire prevention and control in all public buildings in Nigeria. It is, therefore, imperative that existing laws on safety are strengthened and strictly enforced in order to achieve a safer society.

The present administration in Lagos State is poised to ensure a safer and better environment for all residents. To this end, it has embarked on pragmatic strategies aimed at repositioning all emergency agencies in the state. It has put in place mechanisms aimed at strengthening collaborative efforts among these various agencies. But for such pro-active measures as this, the effects of current fire episodes in the state would have been more complicated.

The Lagos State Safety Commission as well as the Lagos State Emergency Management Agency, LASEMA, are currently at the vanguard of creating consciousness on the dangers of unsafe practices that cause fire and other disasters in the state.

Similarly, the state’s Fire Service currently boasts of modern fire -fighting equipment such as 32 Dragon pumpers’ fire-fighting trucks, extrication and rescue equipment, breathing apparatus, provision of utility vehicles, improved welfare packages for staff among others. This is in addition to having a passionate and fearless workforce.

However, for the fire-fighters to perform optimally, it is important that they are given the right of way by motorists during emergency operations. Provocative acts such as attacking or cursing fire fighters, while on duty, must be discontinued. Fire fighters are our brothers and sisters who have chosen to take on such a delicate job in order to safeguard the safety of everyone. We must do everything humanly possible to assist them in positively discharging their duties.

Meanwhile, residents across the state should continue to take advantage of the state emergency lines, 767 and 112 (tolls free), to contact relevant agencies in case of any emergency.

-Ogunbiyi is of the Lagos State Ministry of Information and Strategy, Alausa, Ikeja