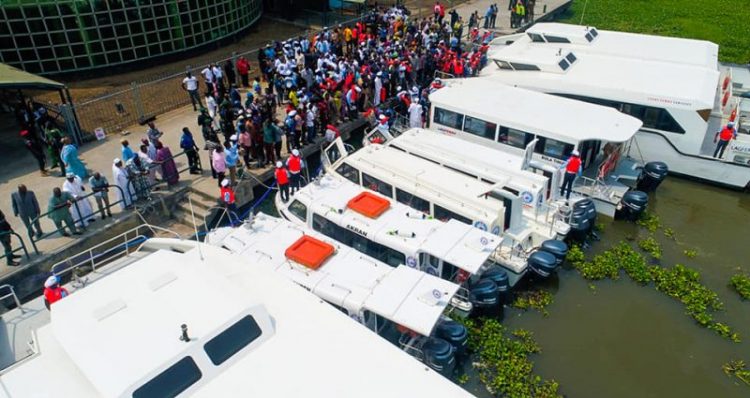 Sanwo-Olu unveiled the speed boats, which will be operated by the Lagos Ferry Services (LAGFERRY), at a ceremony held at Badore Ferry Terminal in Eti-Osa Local Government Area on Tuesday.

The event marked the commencement of commercial operations in waterways transportation by LAGFERRY. The Governor also launched a mobile application designed to facilitate easy access to the water transportation services.

Commissioner for Transport, Dr. Frederic Oladehinde, described the event as another giant stride in Transport Sector Reform embarked on by the Sanwo-Olu administration, saying the standard of the boats would meet the transportation need of residents in an emerging Smart City.

Oladehinde listed the six routes of LAGFERRY’s operations, as Ikorodu to Falomo; Ikorodu to Ebute Ero and Marina; Ebute Ero to Ijegun Egba, Apapa and Marina; Bayeku to Oke Ira Nla and Falomo; Mile 2 to Marina, and Badore to Ijede.

All the boats are built with comfortable seats, in-built Wi-Fi and modern technological devices that will aid smooth operations and safety

Sanwo-Olu said the intervention represented a “great leap” in his administration’s strategy to deliver an effective and integrated inter-modal transportation system in addressing the perennial issue of traffic congestion on the roads.

“The narrative of transportation in Lagos is about to change for good, as we are set to take full advantage of the water bodies to decongest our roads and substantially reduce travel time for commuters.

“Today, we are launching eight units of additional ferries to complement the existing six ferries in the fleet of Lagos Ferry Service. It is glaring that for Lagos to be a functional smart city that we desire, there must be diversification of the mode of transportation. There must be interconnectivity of the rail, road and water transportation systems.”

The design and fabrication of the new boats were totally worked out by two local boats manufacturers in line with Sanwo-Olu’s promise to explore local capacity in providing solutions to various challenges.

“We are going to spread the efficiency of the LAGFERRY services to meet the demand of the people at various times of the day. Before the end of the year, we will double the capacity in the LAGFERRY’s fleet from 14 to 30 boats. This is to enable the agency discharge its mandate to ease the movement of Lagosians from various parts of the city to another through the waterways.”

Sanwo-Olu promised that modern jetties would also be built in Badagry, Lekki, and Ajegunle, pledging that the one being built in Ijegun would be completed.

Chief Executive Officer of LAGFERRY, Abdulbaq Balogun said the launching marked a new dimension for water transportation in the State.

The agency remains fully committed to exploring the capacity of waterways to strengthen mass transportation in line with transportation blueprint of the Sanwo-Olu administration, he said.

With over 30 jetties across the State, the LAGFERRY boss said Lagos has provided infrastructure to boost water transportation, adding that the commencement of commercial operations by the agency would reduce persistent gridlock on the highways.

“With our global water transportation licence, LAGFERRY will operate on all the waterways routes in Lagos, starting gradually according to the available capacity. We will be deploying all our 14 available ferries to cover the three senatorial zones immediately.

“Our well developed and properly coordinated water transportation is also helping in haulage across the State, moving trucks, containers and goods, thereby relieving the roads of heavy duty trucks which contribute in no small measure to failure of roads.”

Before the fourth quarter of the year, Balogun said LAGFERRY would extend its services to all 40 water routes licensed for Lagos.