Newspapers will die, journalism will survive 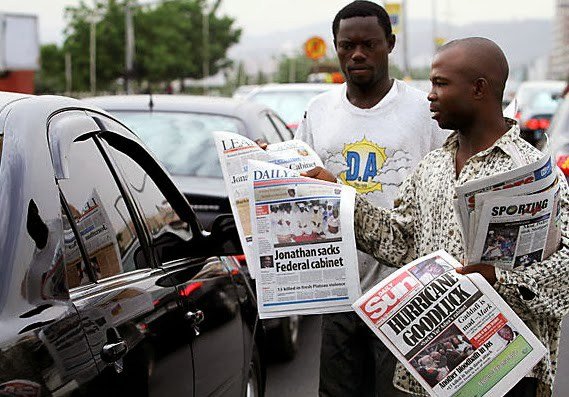 I was invited here to speak around the theme: Effective and Influential Presentation/ Performance for Progress. If that theme sounds confounding at first blush, it was clarified later: “Please let us know more on how to work on efficient stories and investigative reports better than ordinary stories. It is essential to enable the newspapers to become what more people in Nigeria will buy to read”.

I guess my host’s anxiety must be over declining newsstands’ sale, in comparison with what obtained, five, ten years ago. Please, be assured your newspaper is not alone in experiencing this nightmare. It is a universal problem.

Globally, newspapers in print are becoming anachronistic and with the way technology is driving the industry, many journalists will soon be jobless, if they do not adapt quickly to the phenomenally changing environment.

On 29 January, 2020, one of the world’s richest men, Warren Buffet , a former newspaper delivery boy, sold his newspaper business for $140million. In the mix of what he sold were 31 dailies and 49 weeklies, including the daily Omaha World-Herald in Berkshire’s hometown in Nebraska, Buffalo News in New York, Richmond Times-Dispatch in Virginia and Tulsa World in Oklahoma. He sold to Lee Enterprises Inc. which controls 50 other newspapers. While you wonder what the buyer would do with the new acquisitions, ponder on Buffet’s motive. His business philosophy has always been not to sell any good business. After lamenting the newspaper industry’s decline, as the Internet deprives traditional newspapers of revenue streams., he has decided to do what smart businessmen do, by cutting his losses and running away.

According to Reuters, Warren once told Yahoo Finance in April last year that the newspaper industry was “toast.” He also told shareholders of his Berkshire business in May 2018 that only the Wall Street Journal, the New York Times and perhaps the Washington Post had digital models strong enough to offset declining print circulation and ad revenue.

So it is clear, as Buffet has shown, that newspapers are really in the throes of bad times. So the challenge will be how to make a digital model that will replace print and make money.

I believe some of our newspapers are on course to pursue the digital model.

While readership is declining offline, it is growing online with a universal audience.

Getting the digital model right is the responsibility of all journalists who provide content and the web managers, who ensure that visitors have seamless visits to the site. Content is what drives traffic. Rich content will always bait information seekers online to click the site. And as you know, the more visitors you can lure, the more money you will make in dollars.

Our concern therefore will be on how the journalists working on the various editions of their newspapers, either the Monday-Friday editions, Saturday or Sunday edition will improve on content delivery to continue to lure visitors to the site. Our concern is how the newspapers can build their digital architecture to make money.

Confronting the challenge starts with good writing for that is the foundation of good journalism. As newspapers battle the banditry of Facebook and Google that provide free newsfeeds to readers, some are working round it by putting paywalls on their sites, asking visitors to subscribe and pay as low as $1. The Guardian newspaper in the UK follows a different path by asking for donations from visitors, who are impressed by their brand of journalism.

The choice is open for every newspaper to make. What is clear and what the future portends is that sooner than later, online newspaper readers will pay for content. Thus what legacy newspapers have lost on the newsstands they will gain online, with subscriptions for their digital offerings. I must emphasise that newspapers hoping to earn online subscription income must be able to offer compelling content, not just in text, but in all multi-media forms, video, infographics etc.

Those who can make that possible are all of you. Your organisation is expected to develop a strategy to achieve this.

No one should weep anymore over the decline of print. The present and future is in digital news. Newspapers will die, but the insatiable appetite for news and information will keep journalism alive and thriving.

To make this possible, our journalism must change, our presentations must be more robust to meet the needs of our times, especially in the age of fake news.

I have identified in this short paper several areas where newspapers can focus to do better journalism.

The first condition before anything else, which you need to satisfy is the appropriate use of English as the audience is global.

Don’t have a cow mentality by parroting or following the trend. Always verify your stories, no matter the source. Recently, some Nigerian newspapers reprinted a fake news about a Nigerian said to be aboard the Ukrainian plane that was shot down in Iran early this month. Just some few days before then, the airline published its manifest. There was no single Nigerian name on the list. A simple check would have averted the peddling of the fake news.

Use Google and Bing tools to add flesh to your reports: check for the correctness of information, names, background etc. Show depth in your story. It stands you out. Recently, President Buhari said in the UK that remittances by Nigerians in the diaspora was $25billion, a figure once discredited by CBN Governor, Godwin Emefiele, who gave an estimate of $2-$2.5billion.
Be wary about what is posted on Instagram or Facebook or even Twitter. Always ensure that the information you are picking is from the verified accounts as clones exist. Also ask questions about the plausibility of what is being said. Recently, Dino Melaye threatened to sue over a report that said he had built a multi-billion Naira mansion. Because he gave that impression by showing himself seating on luxury settees does not mean he has built a multi-billion Naira mansion.

As a journalist, join Twitter, if you have not joined, for it is now the newsroom of the world. You are likely to get news alerts on this social media platform via Twitter trends.

5. Journalists on the field are the first line editors; don’t send a report that you have muddled up or that has nuggets of inexactitudes. Never send reports that leave many questions unanswered. Ask questions at the source, filter your information. When a matter is not clear to you, ask questions before you send the story to the office or the web editor or press the ‘publish’ button.

Let me give examples: At the weekend, we had rerun elections in many states. In Sokoto, there were three Assembly elections, won by the PDP. All the reports failed to tell us how the outcome affects the state of the parties in the House, where the APC controls the main offices, including Speaker. The report did not tell us anything about the people being elected and what they are bringing to the House.

In Imo, assemblymen are switching loyalties from their parties to the APC, the new ruling party. They have done so twice. How does this affect the strength of the parties in the Assembly. The reader wants answers.

Many reports these days are superficial and antithetical to good journalism.

6. Fact Checking: Every newsroom must have a fact-checking desk, because our politicians and business leaders throw many lies around. In the US, media fact-checking has shown that President Trump has told over 16,000 lies since he was sworn into office and they are still counting his lies. The readers will be grateful for helping him to know the truth.

7. Data Journalism: Our business is information. We need data therefore to drive it. I will advise newspapers to create a Data Desk, which can be combined with Fact Checking Desk, to build infographics that can help to further elucidate daily stories.

8. Video: the convergence between the newspaper newsroom and TV has already happened. All newspapers should invest in building a TV Studio of its own to videolise news.