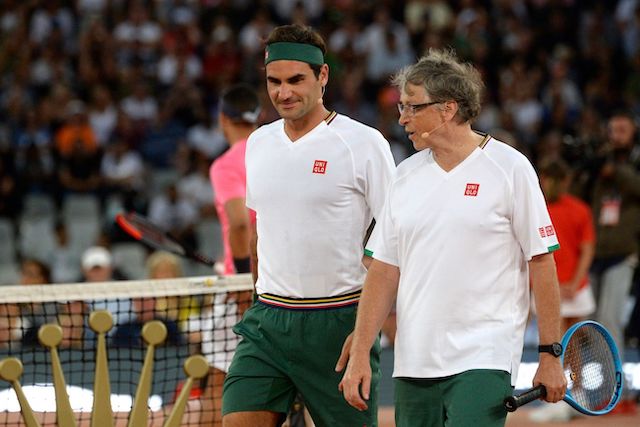 Federer and Bill Gates team up for the doubles

Roger Federer and Rafael Nadal, long with Bill Gates and Trevor Noah have jointly set record as they broke the highest attendance figures for a tennis match in a Cape Town charity match on Friday night.

Federer set the previous highest figure months ago when he and Alexander Zverev played an exhibition event together in November but the 51,954 in attendance in Cape Town was nearly 10,000 more than the 42,517 who rocked up in Mexico City.

The match was the sixth edition.

Federer, whose mother was born in South Africa, first teamed up with Microsoft co-founder Bill Gates to beat Nadal and comedian Trevor Noah 6-3 in a doubles match, before defeating his great rival Nadal 6-4 3-6 6-3 in singles.

‘I think the people wanted to see us play proper tennis and not just be clowns,’ said 20-time Grand Slam Federer after the match.

‘It was such a privilege to be here tonight. Of course, we wanted to try and play the best tennis we can, that’s what we are world-famous for. Federer and Nadal embraced at the end of the match


‘It was an absolute pleasure to share the court with Rafa again, but the first time here in beautiful Cape Town in South Africa means so much more.

‘It really is very special on so many levels. This is more than just tennis and I really hope we can do it again, that Rafa can do it again one day by coming back to this beautiful country.

I’m so proud to have roots here.’ Nadal, who has won 19 major titles, added: ‘We tried our best as always. The energy has been fantastic”.

With Reports by metro.co.uk