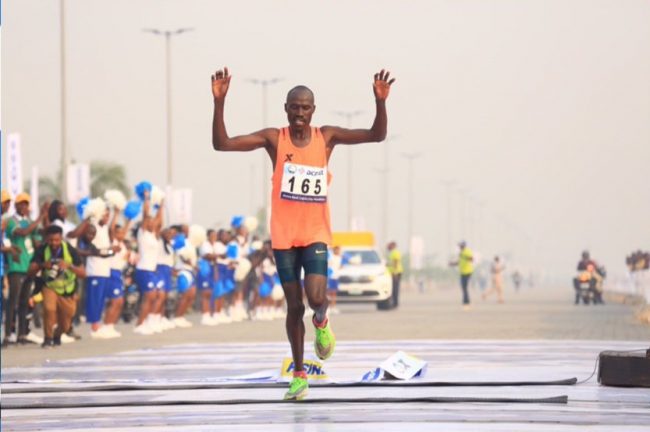 David Barmasai Tumo at the finish line: winner of the Access Lagos City Marathon of 2020

When will Nigerians step up their acts in the Access Lagos City Marathon with East Africans winning the grand prizes for the fifth year running?

In 2017, Kiptum defended his title finishing the race, much faster, with a time of 2 hours 15 minutes 20 seconds. Another Kenyan Rodah Jepkori Tanuyi emerged as the first place winner in the women’s category with a time of 2:37:52, a record then until it was smashed this year.

In 2018, French-Kenyan Abraham Kiprotich came first with a race record of 2:13:04 hours in the men’s category while Ethiopian Alemenesh Herpha Guta came first in the women’s category posting a time of 2:38:25

In the female category, Ethiopian Dinke Meserete finished first with a time of 2:48:02.

Now this year, the East Africans have repeated their exploits, with Kenyans David Barmasai Tumo and Sharon Jemutai Cherop being the winners of the 42 km Marathon. Both wrote their names into the records, as well.

Tumo, the 31 year-old Kenyan born in Eldoret, was the winner of the 2011 Dubai Marathon) and came fifth at the 2011 World Championships in Athletics.

Cherop is a 35 year-old veteran marathoner. She won a bronze medal at the age of sixteen in the 5000 metres at the World Junior Championships.

She was the bronze medal winner in the marathon at the 2011 World Championships and won the Boston Marathon in 2012.

“Naija no dey carry last”, we say. When are we stepping up in our own marathon?