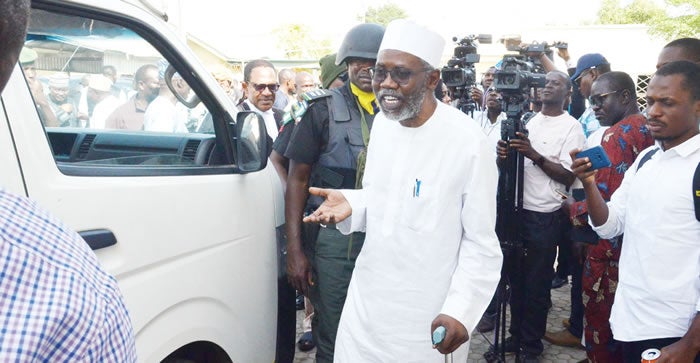 Immediate past Attorney-General of the Federation and Minister of Justice, Mohammed Adoke (SAN), has been granted bail on fresh money laundering charges.

He was granted bail by Justice Binta Nyako of the Federal High Court in Abuja, earlier today.

Justice Binta Nyako imposed the same terms and conditions of the bail they were earlier granted by Justice Idris Kutigi of the Gwagwalada Division of the Federal High Court in Abuja, on January 30.

Justice Kutigi had granted each of the men N50m bail with a surety, each.

Adopting the same conditions on Monday, Justice Nyako directed that the defendants should deposit their passport with the FCT High Court.

Defence lawyers – Chief Mike Ozekhome (SAN) and Mr. Olalekan Ojo(SAN), who said their clients had already met the bail conditions, pleaded with the court to make a specific order barring the Economic and Financial Crimes Commission from re-arresting them once the release order is served on the commission.

The judge said such order would not be necessary as there would be no basis for their rearrest or continued detention once the court’s release order is served.

Adoke and Abubakar had earlier pleaded not guilty to the seven counts of making payments of dollar equivalent of about N600m in violation of money laundering law.

The prosecution, the Economic and Financial Crimes Commission, alleged that they committed the offences in September 2013.

The judge fixed April 1 and 2 for trial, The Punch reported.