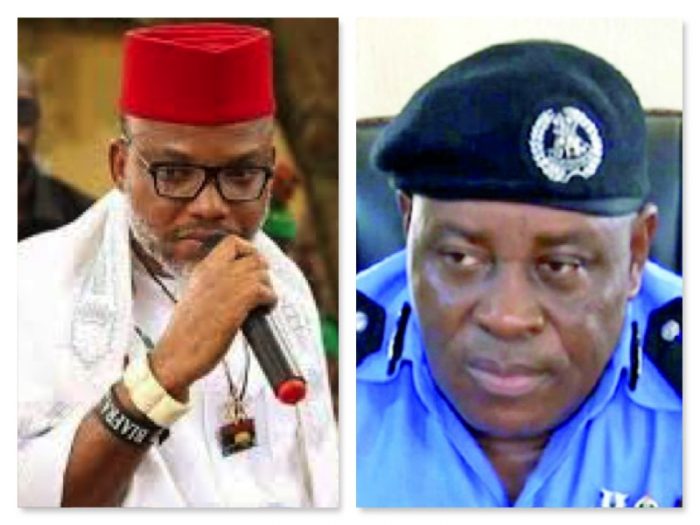 The police command in Abia has flayed the rumour that it is plotting to scuttle the burial of the parents of Nnamdi Kanu, the leader of the proscribed Indigenous People of Biafra (IPOB).

They will be buried in their country home in Umuahia North Local Government Area of Abia on Friday.

The Commissioner of Police, Mr Ene Okon, has repeatedly warned IPOB to steer clear from the burial.

Okon told newsmen in Umuahia that the Federal Government had proscribed IPOB and that he would not fold his arm and watch the organisation to operate in the state.

He said that the police would disrupt the burial, “if IPOB flag, insignia or any form of identification of the organisation if seen at the burial”.

However, in a statement in Umuahia on Tuesday, the command’s spokesman, SP Geoffrey Ogbonna, urged the public to “disregard the rumour” that the police commissioner was plotting to scuttle the burial.

Ogbonna stated, “the Commissioner of Police urges the public to disregard the rumour making the rounds that he wants to scuttle the burial.

“On the contrary, he has the good intention to provide security for the lives and property of the people during the burial.”

He further stated that the presence of security operatives “in and around the community should not be seen as a threat but a proactive measure to prevent the infiltration of miscreants and hoodlums into the community” to foment trouble and truncate the burial.

He stated that the command had been inundated with intelligence “that miscreants disguising as IPOB members intend to hijack the burial, in solidarity with its leader.”

According to the statement, the police boss assured residents and sympathisers that the command would provide adequate security for lives and property during and after the burial.

He further warned IPOB “to steer clear from the environment”, saying that the command “will not fold its arm and watch their unlawful activities.”

Meanwhile, palpable fear and tension have enveloped the quiet community as residents fear a possible police/IPOB clash during the burial, forcing some to relocate to other parts of Umuahia.