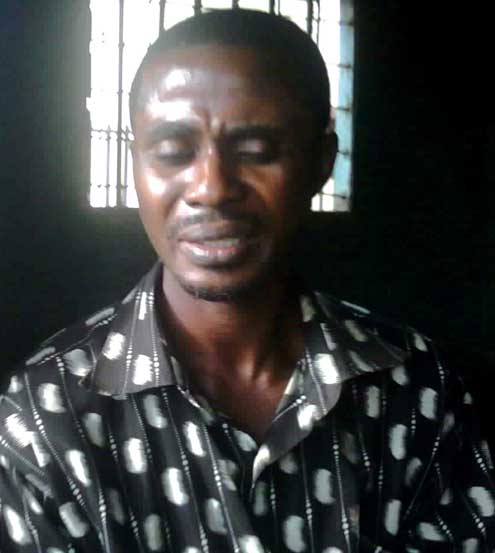 A Lagos woman on Tuesday stunned an Ikeja Sexual Offences and Domestic Violence Court that her three daughters, aged 12, nine and seven were serially defiled by a muslim cleric, the family housed free for between seven and eight years

The victim’s mother made the revelation while testifying as the second prosecution witness in the trial of Ibrahim Idris, a 26-year-old cleric, charged with defilement.

The mother of six, who is also married to a cleric while being led in evidence by the state counsel, Mr Gbenga Alagbe, told the court that she knew about the alleged defilement from a teacher in the school her daughters were attending.

“In 2017, I received a call from the teacher of the school my children go to for lessons. The teacher told me that one of my daughters told her something and that she wanted me to hear for myself what she said.

“When we got to the office at the school, my oldest daughter (Daughter A) said that Idris slept with her and her younger sisters.

“I was told by the teacher that earlier while Daughter “A”was being interrogated about the allegations, she ran out of the class.

“A woman had seen her and had taken her back into the school and when she saw a male teacher she was scared because Idris was sleeping with her and anytime she sees a male teacher, she becomes withdrawn and scared ,” the mother said.

The mother said following the revelation, she took her children home from the school and her husband who was not around during that period, arrived two days later on Aug. 11, 2017.

She noted that when the father arrived, the defendant was summoned to their residence.

“We asked him about the allegations and he insisted nothing happened. We took him to the police station for questioning and we were referred to the Mirabel Center at Ikeja for medical examinations.

“However, when we got to the police station, Daughter A told me what had happened,” the mother said.

While being cross-examined by the defence counsel, Mr Lekan Ijelu, the woman said the defendant was living with her family when he allegedly committed the crimes.

She noted that he had stopped residing with her family when the allegations came to light.

“He lived with us for seven or eight years. When he was living with us permanently, he used to go for his Islamic classes in the morning around 8am and return around 5pm.

“When he was temporarily residing with us, he used to stay on Fridays till Sundays,” she said.

The mother told the court that there were six adult males including the defendant who had lived in her home with her husband who is also a cleric.

She said she was shocked when she heard the allegations.

“He is a gentle boy. He says the truth all the time and when I’am going out, I leave my kids with him to take care of them for me, I trusted him so much, I was shocked to hear what he did to my daughters,” she said.

Following her evidence, the state prosecutor appealed to the presiding judge to address the woman to ensure that the mother brings her three daughters to court to testify against Ibrahim.

“My lord, the witness said that she did not want to bring her daughters to testify, because she feels it may be traumatic for them,” Alagbe said.

Responding, Justice Sybil Nwaka told the woman that preventing her children from coming to court will amount to the offence of obstruction of justice.

“The children are the victims. They must come to court to testify. This case is not your case, it is the case of the Lagos State Government.

“You reported the case, the children must come to court to testify. That is the process and procedure, if not you will be regarded as a hostile witness and that is an offence,” Justice Nwaka said.

The woman responded: “My lord, I feel it has been a long time. I do not want them to be reminded of what happened.”

Justice Nwaka adjourned the case until March 4 for continuation of trial.

Earlier during proceedings, a medical doctor and first prosecution witness, Dr Oyedeji Alagbe, of the Mirabel Center (a sexual assault referral centre) had interpreted the finding of his medical examinations on the minors.

Alagbe confirmed to the court that medical examination revealed that the three daughters were defiled.

According to the prosecution, Ibrahim committed the offences sometime in 2017 at the complainants home at Agege, Lagos.

“The defendant, Idris, a cleric on various occasions defiled the sisters aged 12, nine and seven-years-old in their home.

“The offence contravenes Section 137 of the Criminal Law of Lagos 2015 which prescribes a life sentence for anyone found guilty of the offence of defilement,” Alagbe said