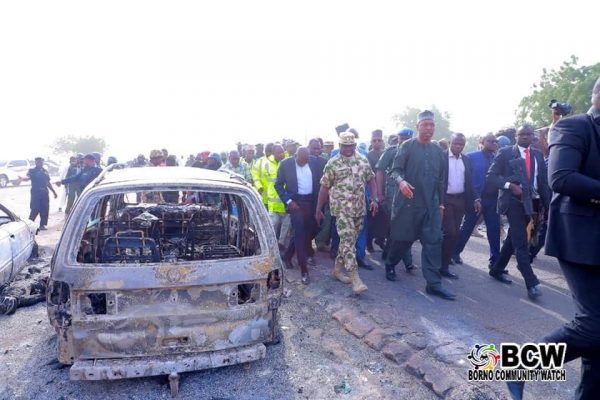 Sunday’s victims of Boko Haram attack in Auno, Konduga LGA of Maiduguri were like sitting ducks, waiting to be fried, when Boko Haram gunmen emerged to deal another devastating blow to Nigeria’s soft targets.

The victims were commuters returning to Maiduguri, but they were shut out from entering the city at Aoun by soldiers manning the gate at this point. About 300 vehicles were shut out because they all failed to beat the 4pm curfew deadline.

Among the vehicles so trapped by the curfew was also a petrol tanker belonging to the military, P.M.NEWS learnt. It turned out to be the source of agonising death by some of the estimated 30 people, with nine burnt to death. Among the dead were two UNIMAD female students.

Boko Haram reportedly set the truck on fire, causing an inferno that spread to 18 vehicles, burning the occupants to death.

Dozens of women and children were also abducted.

According to P.M.News sources in Maiduguri, the Boko Haram militants did not attack residents of Auno. Only the commuters were attacked, suggesting that there could be some understanding between Boko Haram and the villagers.

Many villagers are collaborating with Boko Haram, complicating the anti-insurgency efforts of the government, P.M.News learnt.

Auno village is located about 24 kilometres to Maiduguri capital.(Watch the video of the scene after the attack

The commuters were returning to Maiduguri from various destinations when they were shut out from entering the heavily garrisoned city. More than 300 stranded stretched from Auno, Banishaik, Kukareta and Ngamdu.

Abdulrahman Gimba, a resident in Auno told newsmen that no military was present at the time the insurgents attacked the commuters blocked from gaining access to Maiduguri.

The soldiers usually lock up the gate at 4pm, using barricades and leaving everybody to his fate. They will then move away with all their vehicles to a safer place.

Bana Bunu, another resident said no permanent security was attached to Auno village, noting that they usually work on short shift, which is morning till in the evening where they will pack their things and go away.

Bunu said he had to flee into the bush amidst sporadic gunshot fired at them before he survived the attack.

“Many have died while dozens were still battling with various injuries as a result of stray bullets.

Ibrahim Malam, a commuter attributed the cause of the wild fire which razed 18 vehicles and killed at least nine persons to the military tanker that was prevented from passing through the checkpoint.

“It was unfortunate to note that it was the military petrol tanker that led to the death of the innocent people.

Collaborating the claim, Governor Babagana Zulum, accused the military of leaving the people at the mercy of the insurgents.

“We have to be brutal in telling the truth. I am pushed to the wall to say the truth. Since I was inaugurated as Governor of Borno State, Boko Haram have attacked Auno six times.

“Another thing is that the military has withdrawn from Auno town. I am not undermining the capacity of the military but we have made repeated appeal for the military to establish their unit in Auno.

“They are here but as soon as it is 5 pm, they close the gate and lock the people and go back to Maiduguri. This is not right,” Gov. Zulum said.

Zulum also confirmed the victims: “Among the victims, those killed were mostly motorists who were plying a road in the community.”

Brig. Gen Sunday Igbinomwanhia, Garrison Commander Of Operation Lafiya Dole, said the military were committed to protecting lives and properties adding that the troops were conducting clearance operation at other locations when the attack happened.

He said the military will not intentionally allow the people to be killed adding that the people must provide credible information to the troops to enable them secure life and properties in the area.

Boko Haram, which launched attacks in Nigeria’s northeast region since over a decade ago, is known for its agenda to maintain a virtual caliphate in the most populous African country. Enditem

Meanwhile, the Nigerian Air Force on Monday said it carried out an airstrike and killed several Boko Haram leaders in the restive northeast state of Borno.

Fighter jets obliterated a compound in a settlement where Boko Haram leaders assembled for a meeting on Saturday, Nigerian Air Force (NAF) spokesman Ibikunle Daramola said in a statement.

Daramola did not identify the Boko Haram leaders killed in the airstrike.