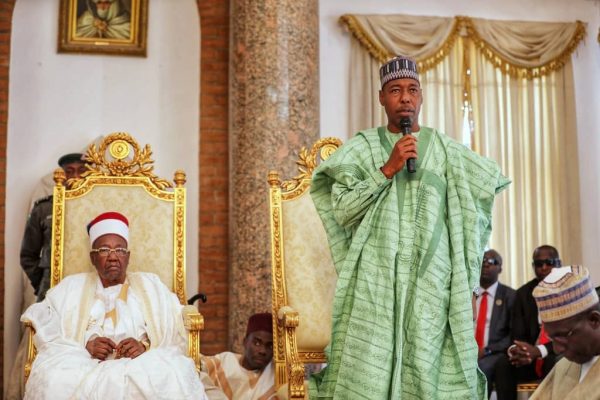 Gov. Babagana Zulum of Borno has urged the Nigerian Armed Forces to change strategies in the ongoing fight against Boko Haram.

The governor made the call when President Muhammadu Buhari paid a sympathy visit to the Shehu of Borno, Alhaji Abubakar El-Kanemi, after the killings caused by the insurgents in Auno community.

An estimated 30 people died. Eighteen vehicles and several homes were razed in the fire triggered by the insurgents after they torched a military fuel tanker stranded amidst other vehicles. No fewer than nine people, among them two female students of UNIMAID were burned alive.

Zulum acknowledged the successes recorded by the military in the past three years but called for new tactics to check the resurgence of insurgency activities in the state.

“Your Excellency; between March 2019 to date, we have started witnessing horrific and spontaneous attacks by the insurgents which have resulted into the loss of lives and properties of our people.

“We are calling upon the Nigerian military to change strategies and we can borrow a leaf from the success our military was able to hugely record in the years 2016 and 2017 with a view to ending the insurgency.

“We need to keep taking the war to enclaves of the insurgents in the fringes of the Lake Chad Basin, Sambisa Forest and some notable areas,” Zulum said.

The governor commended Buhari for his commitment to ending the insurgency and his consistent empathy to the people of the state.

“Let me appreciate Mr President for associating with us at this our very trying moment. I am so surprised that we have forgotten the past,” he said.

Zulum recalled how Boko Haram in the past held 20 out of the 27 local governments in the state, while all the five routes into Borno state were largely inaccessible with exception of Maiduguri-Kano road. He recalled the sporadic bombings and killings in the state capital, Maiduguri and how the narratives changed when Buhari took over power in 2015.

But he added that the insurgents have returned.

Buhari reiterated his commitment to end the insurgency, fight corruption and lead the country to economic recovery.

The president called on the people of Borno to continue to cooperate with the military and other security agencies to end the insurgency.