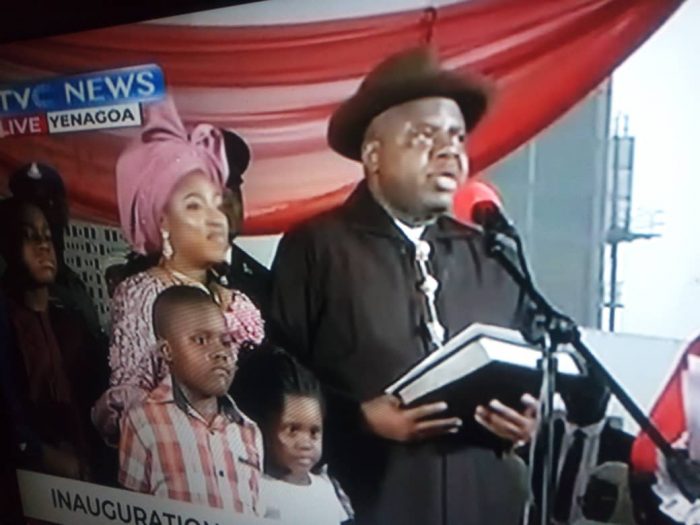 Senator Douye Diri of the Peoples Democratic Party, PDP, was on Friday sworn in as the 5th democratically elected Governor of Bayelsa State.

The governor was sworn in after the Supreme Court nullified the election of David Lyon of the APC.

The Independent National Electoral Commission, INEC, in compliance with the Supreme Court’s judgment declared Diri winner of the poll and issued him with Certificate of Return.

This pave way for the swearing in of the Diri and his deputy at the Bayelsa Government House on Friday.

The governor was sworn at exactly 6:55pm on Friday by Chief Judge of Bayelsa, Hon. Justice Kate Abiri.

His deputy, Lawrence Ewhrudjakpo was earlier sworn by the Chief Judge.

The usual paraphernalia occasioning swearing in of governor was missing at the hurriedly carried out ceremony. Even the citations of the governor and his deputy were not read.

In his inaugural speech, Diri declared that he would always work to achieve peace, love and prosperity for the people.

He described the swearing in day, as “a day made by God and marvelous in the eye of the people of Bayelsa”.

“I have been sworn in today as your new governor, my advice is that we have to be magnanimous in victory. We have to forget the bitterness and  acrimony, because if we kill ourselves, who are we going to lead? Of course, we are not going to  lead animals.

“I, therefore, bring to you message of love, hope and prosperity for Bayelsa. Let us eschew all the bitterness and acrimony and learn to love ourselves irrespective of political parties,” Diri stated.