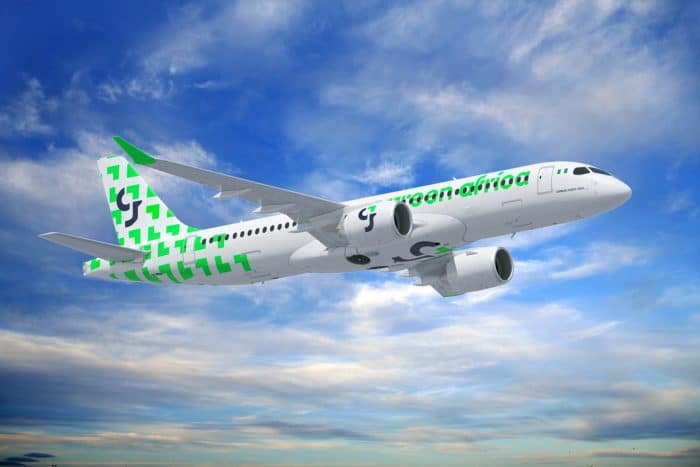 Green Africa Airways with a prototype A220-300 aircraft

A new Nigerian airline, Green Africa Airways that is yet to fly any route, has made an order for 50 Airbus A220-300 aircraft.

The order was made at the Singapore Air Show with the airline signing a Memorandum of Understanding (MoU) with Airbus.

An elated Airbus described the order the largest ever from Africa and indeed one of the biggest orders for the A220 in general.

Founder and CEO of Green Africa Airways, Babawande Afolabi, commented on the order in a press release published on the airline’s Facebook page.

“Together with Airbus, we are incredibly proud to announce the largest order ever for the A220 from the African continent. The Green Africa story is a story of entrepreneurial boldness, strategic foresight and an unwavering commitment to using the power of air travel to create a better future.”

Airbus Chief Commercial Officer Christian Scherer, speaking from the Singapore Airshow, added: “We are excited about the Green Africa project, its legitimate ambition and its professionalism, evidenced by their most discerning choice for their operating assets. The unique characteristics of the A220 will allow the airline to unlock destinations and route pairs that previously would have been considered non-viable. We look forward to our partnership with Green Africa and to accompany their development with the most efficient aircraft in its class.”

The A220 is the only aircraft purpose-built for the 100-150 seat market; it delivers unbeatable fuel efficiency and widebody passenger comfort in a single-aisle aircraft. The A220 brings together state-of-the-art aerodynamics, advanced materials and Pratt & Whitney’s latest-generation PW1500G geared turbofan engines to offer at least 20 percent lower fuel burn per seat compared to previous-generation aircraft, along with significantly lower emissions and a reduced noise footprint. The A220 offers the performance of larger single-aisle aircraft. At the end of January 2020, the A220 had accumulated 658 orders.

Green Africa Airways has been in development since 2016, Simple Flying reported.

It has a goal of becoming a key low-cost carrier in the growing African aviation marketplace, and originally planned to begin operations last year.

It successfully secured an AOC from the Nigerian government but lacked an essential component of a successful airline – aircraft.

Previously, Green Africa had placed an order for 50 Boeing 737 MAX aircraft, along with 50 options for the same. As these were unable to begin delivering in 2019, due to the worldwide grounding of the type, Green Africa had to put the brakes on its launch.

There has been no word that the order from Boeing has been canceled, but the decision to commit to the A220 will be a significant blow for the US plane maker.

Low-cost carriers typically have low diversity within their fleets, and tend to stick with one manufacturer.

Although airline startups can sometimes fall flat before they even get off the ground, Green Africa seems to be in a good position to make a success of itself.