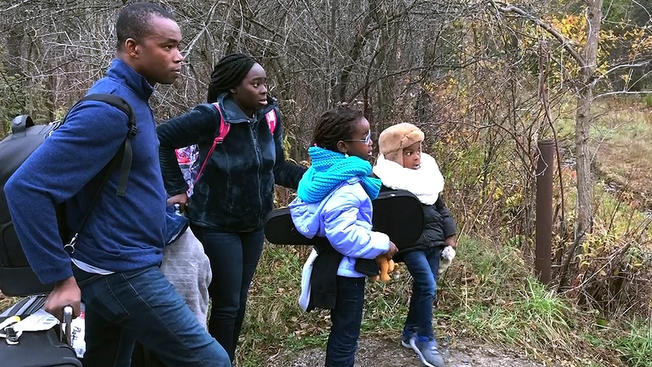 A Nigerian family from US trying to cross into Canada at Roxham Border Crossing recently. Canada is still open to immigrants

For the fifth year in a row, more Nigerians emigrated to Canada than the year before as data published by the Canadian government shows the number of Nigerians issued permanent resident permits has tripled since 2015.

According to a report by Quartz Africa, the Nigerian emigration growth rate outstrips some of Canada’s biggest sources of immigrants over the last five years, including India, China and Philippines.

The rise in Nigerian immigrants heading to Canada reflects the North American country’s push to expand its labour force and lower the average age of its workers as its population advances in years.

In 2019, Canada welcomed 341,000 immigrants in total (about 10,000 more it targeted) as part of its immigration policy to attract skilled workers.

One of the reasons is the chance for their children to access better education standards —and the future opportunities that come with it.

“With the appetite for emigration not dampening, Canada’s liberal and welcoming immigration policy is not only attractive but also at odds with other major Western countries. In the wake of Brexit, the United Kingdom has tightened immigration policies.

“For its part, the United States has recently banned Nigerians from receiving immigration visas as part of a new wave of restrictions from the Trump administration’s already long history of tough immigration clampdowns on Nigeria.

“In contrast, Canada is projected to welcome nearly 700,000 immigrants over the next two years”..