Aregbesola to security agencies: Don't give up fight against terrorism 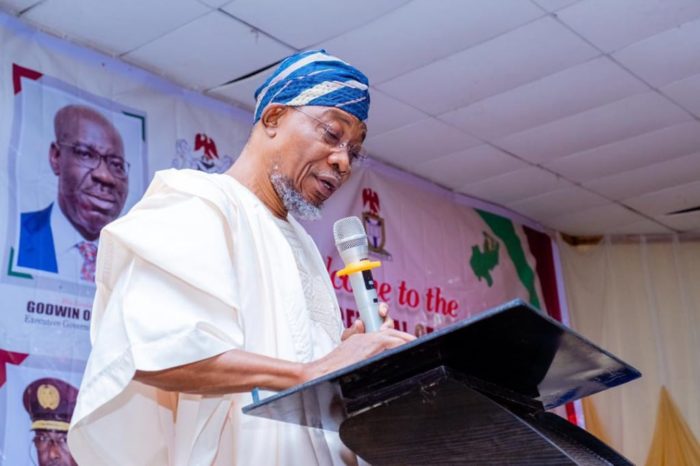 Ogbeni Rauf Aregbesola giving his remarks at the opening ceremony of the Comptroller General of Immigration annual conference holding in Benin.

The Minister of Interior, Ogbeni Rauf Aregbesola has called on security agencies in the country not to give up the fight against terrorism, banditry and all forms of crimes and criminality.

According to a statement by Mr Mohammed Manga, the Director of Press and Public Relations, the Ministry of Interior, the minister urged them to embrace the spirit of patriotism, commitment, and love for the fatherland in order to ensure a peaceful nation.

Aregbesola stated this at a patriotism advocacy programme, which was tagged “Do the right thing: Fall in love with Nigeria”, on Monday in Abuja.

The event was organised by the National Orientation Agency (NOA).

The minister said love for one’s country was “undoubtedly a good trait that imbued people with a sense of loyalty and a desire to coexist peacefully with one another, regardless of religion, political affiliation and cultural background”.

Aregbesola said that in view of the on-going battle against the spate of insecurity, crime and criminality, as well as corruption in Nigeria, commitment of all the security agencies was imperative.

The minister stressed that Nigeria was in dire need of positive values, peace, security, national integration and change of attitude at all levels, with a view to overcoming all threats to internal security.

He said this would improve socio-economic development, which is in line with the policy thrust of the President Muhammadu Buhari administration.

The minister urged Nigerians and the security agencies to continue to demonstrate high level of patriotism to the country by ensuring that all enemies of the state were stopped from gaining entry through the country’s borders.

Aregbesola, who unveiled the “Fall in Love with Nigeria” campaign banner made by the NOA, commended the security agencies for their doggedness towards curtailing the activities of the insurgents, bandits and other criminal elements.

He said that the damage to the country would have been devastating without the security agencies.

The Director-General, NOA, Mr Garba Abari, noted that the promotion of peace and security was a task for every Nigerian.

Abari said that all hands must be on deck in supporting government’s effort at sustaining peace and security in the country.

“As the nation waits with bated breath and great expectations for the celebration of our 60th independence anniversary, come Oct. 1, it is indeed time to cast our minds back to our long journey to ultimate nationhood as a people from diverse cultural, social and political backgrounds,” he said.

The NOA boss, therefore, urged all Nigerians to remain resolute “in our march towards greatness”.