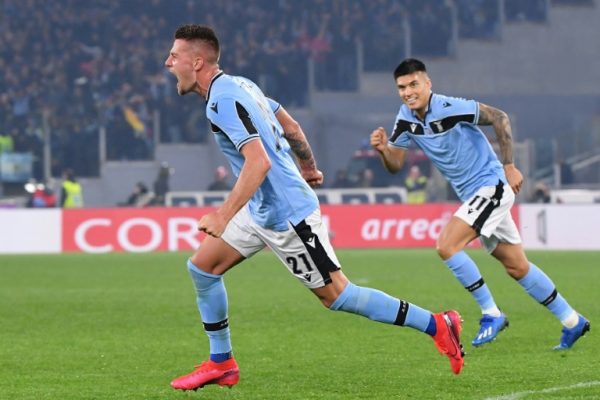 Lazio are now just one point off leaders Juventus after a come-from-behind 2-1 win over Inter Milan on Sunday.

Lazio coach Simone Inzaghi gave warning his side are ready to fight for their first Serie A title since 2000, with Juventus now in sight.

Juventus reclaimed pole position thanks to Paulo Dybala and Juan Cuadrado’s goals as the Turin giants rediscovered their winning form 2-0 at home against Brescia.

Inter Milan dropped from top spot to third — three points behind the eight-time reigning champions — after falling to just their second defeat of the season.

“We need to stay humble and focused but I’m sure we will succeed. We have nothing to lose,” said Inzaghi.

“We know that Juventus and Inter are two great teams and we will do everything to fight to the end, knowing that it will be very difficult.”

In a fiery clash in the Stadio Olimpico defender Ashley Young broke through just before the break with his first Serie A goal for Inter Milan after his move from Manchester United.

The 34-year-old got his foot to tap-in off a rebound after Thomas Straskosha had cleared from former Lazio player Antonio Candreva.

A Stefan de Vrij foul on Ciro Immobile allowed the Serie A top scorer to slot in his 26th goal in 24 games this season, five minutes after the break.

Sergej Milinkovic-Savic snatched the winner after 69 minutes amid confusion in front of goal.

“We gifted Lazio two goals,” said Inter coach Antonio Conte as the northerners fell to their second defeat after Juventus in October.

Lazio extended their unbeaten run to 19 games as they target their second Scudetto, with a return to Champions League football on the cards for next season.

In Turin, Argentine forward Dybala curled in a perfect free kick six minutes before the break, shortly after Brescia’s Florian Aye was sent off for two yellow cards in quick succession.

Colombian Cuadrado tapped in the second from close range after a Blaise Matuidi cross with 15 minutes to go, to get back winning after two away defeats.

“We did what we had to do,” said Juve coach Maurizio Sarri.