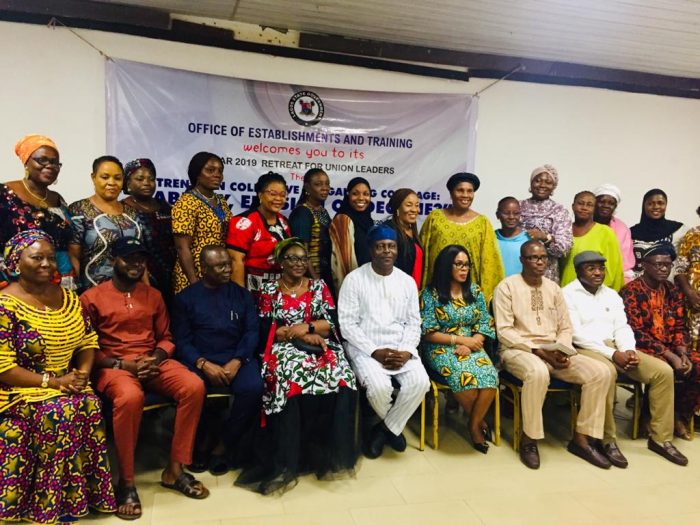 Lagos State Commissioner for Establishments, Training and Pensions, Ajibola Ponnle has described the union leaders in the State as highly experienced and professional.

She also commended them for being leaders who prioritised the collective interests of the people they represent above their personal interests.

The Commissioner expressed this view recently during a retreat for the union leaders, organised by the State Government in Ikeja.

The retreat has the theme: “Trends in Collective Bargaining Coverage: Stability, Erosion or Decline?”

She averred that the various union leaders must understand the demanding nature of governance and the efforts by government to strike a balance between meeting staff welfare and also implementing developmental projects.

The realization of the above, according to the Commissioner, would make it possible for labour leaders to be more realistic and fair in their expectations and demands from the government.

She said that the ways and means which the union leaders engaged the State Government during the negotiation period of the new minimum wage last year showed that the Union leaders were resolute in their demands and above all displayed maturity in their struggle for a better welfare for the State workforce.

She commended Lagos State Union for standing out among their peers, “While some labour leaders in some States are still at loggerheads with the State governments over the implementation of the new minimum wage, the union leaders in our State are bringing maturity into every matter.”

Speaking on the importance of the retreat, Ponnle stated that the objective of the retreat was to enhance the capacity development of union leaders, expose them to global trends in collective bargaining and how to effectively tackle challenges before they become issues.

She stated that the State Government being keen about building trust with Union leaders through an atmosphere that promotef industrial harmony ensured a speedy implementation of the new minimum wage above the N30,000 benchmark by the Federal Government.

While reminding the Labour leaders in the State that Governor Babajide Olusola Sanwo-Olu has fulfilled his electoral promises with the payment of the minimum wage and consequential adjustments, Ponnle solicited for the continued cooperation of the Labour leaders as the governor strives to deliver his vision of A Greater Lagos to all residents of the State.

She stated that the retreat for the Labour leaders would further bring the Lagos State Government and union leaders together in the overall interest of advancing the Lagos State public service and improved welfare for all civil servants.

Ponnle thanked the Governor for his commitment towards prioritising the needs and welfare of civil servants in the State in spite of other competing priorities calling for the attention of the Governor.

While addressing journalists, the Permanent Secretary, Office of Establishments and Training, Abiodun Bamgboye described the Unions as partners in progress.

He said they were always looked up to in every negotiations and issues of interest about the wellness, general wellbeing and welfare of public servants in the State.

On how often such retreat should be held, Bamgboye explained that the Office is in charge of global capacity development and they are determined to doing things differently to get better result.

“Since the inception of this administration, training has not stopped and just like any of Lagos State Public officers, government also ensures that the Union leaders are trained in order to help them deliver more efficiently and effectively”.

Responding on behalf of other union leaders, the Chairman, Lagos State Public Service Joint Negotiation Council, Comrade Razaq Falade commended and appreciated the State Government for the retreat and prompt response to the needs of labour leaders in the state