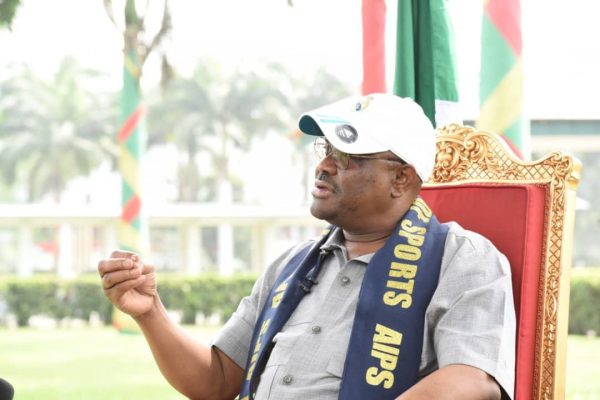 Gov Wike during the interview on Thursday 23 Jan. in Port Harcourt, Rivers State

Rivers State Governor Nyesom Wike said Nigeria has failed if her way to check corruption is by requesting Bank Verification Number (BVN) as a condition for obtaining the new e-passport.

Wike, who spoke on Tuesday at the roll-out of the enhanced international e-passport in Port Harcourt, said he was shocked when he was informed that his BVN will be needed to obtain an international passport.

He noted that the method would create problems for couples intending to travel with their families and urged NIS to revisit the requirement.

Wike said: “I was surprised when I was told to present my Bank Verification Number (BVN). Assuming I want to travel with my one-year-old child, does it mean my child cannot travel with me because he does not have a bank account?

“I don’t know how the BVN has become a factor in the issuance of international passport. That is not acceptable. If this is the only way to check corruption, then we have failed.

“As a governor, you know my salary; you know my account and this can be collected from the Code of Conduct Bureau (CCB). It is not hidden.”

Wike, however, praised the NIS for introducing the e-passport with 10-year validity, saying it would help in acquiring long-term visas.

He also hailed the agency for the improved security features on the passport.

“Introducing the e-passport is laudable because of its improved security features and others. The 10-year validity will afford people the opportunity to have longer visas,” he said.

Governor Wike also urged federal agencies to stop depending on state governments for their operations.

He said: “Federal agencies should stop depending fully on state governments for their operations. The responsibility is too enormous.

“Today, you have asked. The police will ask, the drug law enforcement agency will ask, the Army will ask and others will also ask. How will we survive?”

The governor also noted that the National Identity Number (NIN) requirement for getting the e-passport was also key.

Wike praised the State Comptroller of Immigration Segun Adegoke for starting the issuance in Port Harcourt and appealed to the people to take advantage of the facility to obtain theirs.

Adegoke said the e-passport would reposition and improve the passport issuance regime, and tailor it towards best global practice.

He noted that the new regime offers the options of five and 10-year validity to save Nigerians frequent visits to replace their passports.