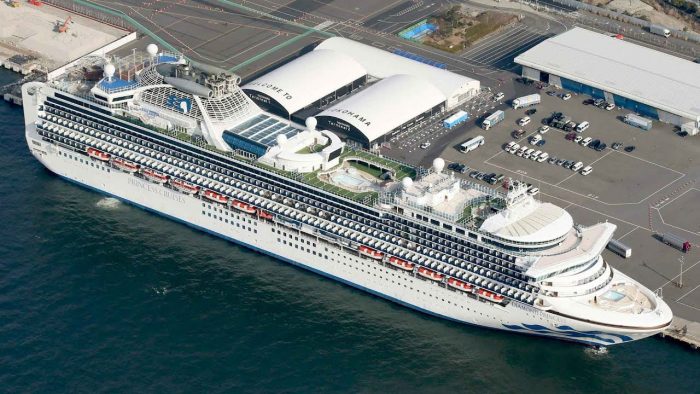 Two passengers from the Diamond Princess cruise ship have died after contracting the new coronavirus.

An 87-year-old man and an 84-year-old woman, both Japanese, died after being brought to hospital from the ship, Japanese broadcaster NHK reported on Thursday, citing government sources.

It brings up the number of deaths from the virus to three in Japan.

The deaths came a day after passengers started to leave the ship, which was quarantined in a Japanese port for two weeks over a Covid-19 outbreak on board.

More than 620 of the passengers on the Diamond Princess liner have been infected on the ship, which has been quarantined since Feb. 3, initially with about 3,700 people on board.

The 87-year-old man had suffered from heart ailments and bronchitis.

Both tested positive for the virus although the woman’s cause of death was listed as pneumonia, the health ministry said.

It added that one health ministry official and another from the Cabinet Secretariat were confirmed to be infected with the virus after both had spent time working on the Diamond Princess.

Three officials had previously been infected.

Japanese media reported that 29 people were in serious condition, including one who had earlier tested negative for the virus, which the health ministry could not immediately confirm.

Japan has well over half the known cases outside China due to the ship infections and the rapid spread of the virus and the quarantine operation has sparked criticism of authorities just months before Tokyo is due to host the Summer Olympics.

He told a news conference that after measures were put in place to isolate passengers on Feb. 5, the number of new infections was now almost at zero.

Japan’s National Institute of Infectious Diseases (NIID) said in a report issued on Wednesday that no new cases of the onset of the COVID-19 disease from the cruise ship were reported on Feb. 16 and Feb. 17 and only one crew member case on Feb. 15.

In a move to reassure the public, the health ministry also issued a statement in both English and Japanese that all passengers had been required to stay in their cabins since Feb. 5 to contain the virus.

The day before, as passengers were being screened, shipboard events continued, including dances and quiz games.

Criticism of the government has played out in social media as well as in parliament. (dpa/NAN)