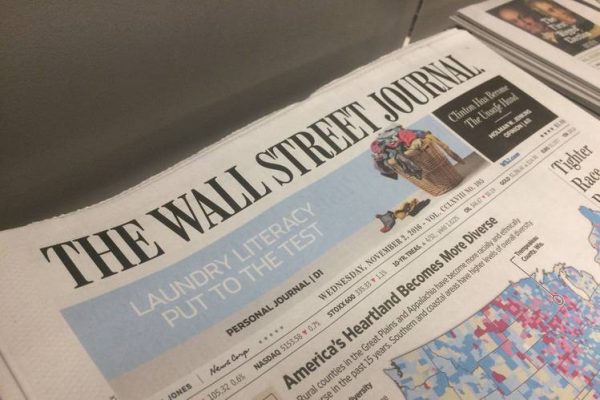 Illustration Only: The Wall Street Journal

China on Wednesday ordered three reporters from The Wall Street Journal to leave the country over what Beijing deemed a racist headline.

The United States promptly protested what it called an affront to press freedom, one day after it also tightened rules on Chinese media organisations that it considers state propaganda.

Chinese foreign ministry spokesman Geng Shuang said a WSJ opinion piece — titled “China is the Real Sick Man of Asia” — had a “racially discriminatory” and “sensational” headline, and slammed the newspaper for not issuing an official apology.

“As such, China has decided that from today, the press cards of three Wall Street Journal reporters in Beijing will be revoked,” Geng told a press briefing.

The Journal reported that deputy bureau chief Josh Chin and reporter Chao Deng, both US nationals, as well as reporter Philip Wen, an Australian, had been ordered to leave the country in five days.

US Secretary of State Mike Pompeo condemned the expulsions and voiced hope that China would one day allow its citizens “the same access to accurate information” that Americans enjoy.

“The correct response is to present counter arguments, not restrict speech,” he said.

The three journalists work in The Wall Street Journal’s news section, which is not linked to the editorial and opinion section.

The newspaper’s publisher, William Lewis, said the outlet was “deeply disappointed” with China’s decision and asked that the visas of the three reporters be reinstated.

“This opinion piece was published independently from the WSJ newsroom and none of the journalists being expelled had any involvement with it,” Lewis said in a statement.

“The need for quality, trusted news reporting from China is greater than ever; today’s decision to target our News department journalists greatly hinders that effort,” he said.

“However, this has clearly caused upset and concern amongst the Chinese people, which we regret.”

The phrase “sick man of Asia” originally referred to China in the late 19th and early 20th century, when it was exploited by foreign powers during a period sometimes called the country’s “century of humiliation”.

“At American newspapers, writers typically do NOT write or approve the headlines,” Mead tweeted after the op-ed was published.

“Argue with the writer about the article content, with the editors about the headlines.”