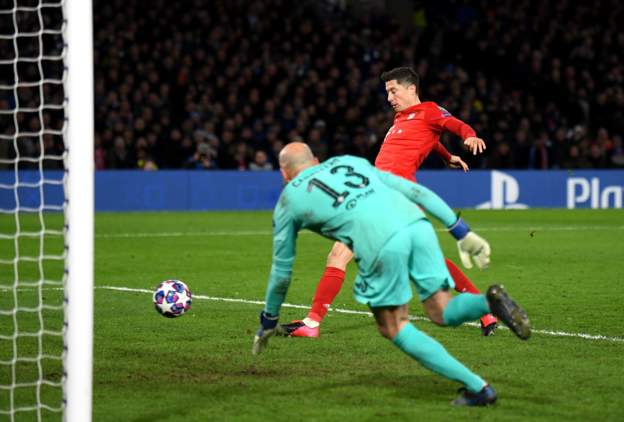 Bayern Munich are certain to move to the quarter-finals of the Champions League as they rocked Chelsea 3-0 at Stamford Bridge, London on Tuesday.

After a goalless first half, the German side put Chelsea to the sword, scoring three goals to take a huge advantage back home.

The Bridge displayed lackluster performance in the match played in front of massive home fans. They were embarrassed by the Frank Lampard tutored side.

The Bundesliga leaders followed in the footsteps of closest rivals RB Leipzig, who won at Tottenham at this same stage six days previously, by coming to the capital and producing a hugely impressive display.

And, as when Bayern inflicted an historic 7-2 home defeat on Spurs in October, former Arsenal star Serge Gnabry was the tormentor-in-chief as he revelled on his return to London.

The 24-year-old scored four at the Tottenham Hotspur Stadium and he delivered the end product Bayern had threatened from the kick-off when he struck clinically twice early in the second half after being set up by the outstanding Robert Lewandowski.

Lewandowski surely snuffed out any lingering hopes Chelsea had of a comeback when he finished off another sweeping attack, fed by the brilliant teenager Alphonso Davies.

As if this was not enough, Chelsea’s misery was compounded by defender Marcos Alonso being sent off late on after a clash with Lewandowski after the experienced Jorginho had been ruled out of the second leg when he received a silly yellow card for dissent, BBC reports.