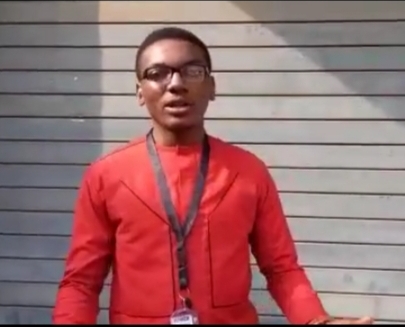 A former reporter with AN24.net, Daniel Ojukwu has been arrested and is currently being detained by the police at the State Criminal Investigation Department, Panti, Yaba, Lagos over a story which he did for the online news platform titled: “Behold Pastor Who Allegedly Enjoys Luring Teenage Girls Into Illicit Relationship” published on February 14, 2020.

The story is about one Pastor Chima Enukoha, described as the Senior Pastor of the Freedom Covenant City Church (FCCC) in Surulere accused by some teenage girls of attempts to lure them into illicit relationships with him.

A statement from AN24.net’s Management issued by Paul Dada, Editor of the news portal, said that Daniel, who just resigned from the online news portal, reported that he attempted to speak with Pastor Enukoha who rebuffed him and asked him to go ahead and publish the story.

However, the said pastor went ahead to petition the police who arrested Daniel and one of the ladies who made the said allegations against the pastor.

“The management of AN24.net has always insisted to its reporters to stick with the ethics of journalism in the discharge of their professional duties.

“We therefore stand by this story written by Mr. Ojukwu. We heard Daniel is being accused of conspiracy and threat to public peace, among other allegations. The Daniel we know, is just a young reporter who wants to make a mark in his profession. He is not even capable of hurting a fly let alone being involved in a conspiracy and threat to public peace.

“Although Daniel is currently not a staff of AN24.net, we are resolved to do all we can lawfully to ascertain that Daniel is innocent of the allegations being levelled against him since he did the report while he was still working with this online news platform,” it said.

It added: “The Management of AN24.net wishes to state without any equivocation that Nigeria is a country that upholds freedom of the press; therefore arrest of young Daniel by Lagos Police is another dark side of the relationship between journalists and law enforcement agents.

“We therefore see Mr. Daniel’s arrest as illegal and unconstitutional. We call for his immediate and unconditional release by the Panti police station,” the statement said.