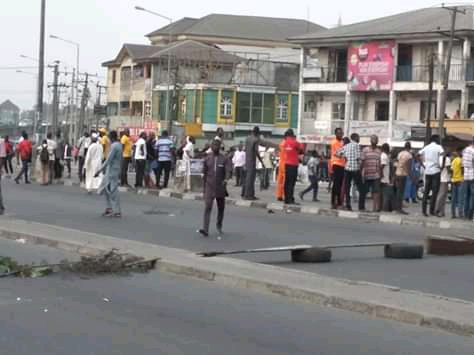 Protest over killing of BDC operator

Rivers State Police Command has vowed to fish out  those connected with the death of an operator of Bureau De Change, BDC, Ladan Yusuf, 75.

Spokesman of the Rivers State Police Command,DSP Nnamdi Omoni, gave the assurance in reaction to the incident that paralysed economic and social activities in Port Harcourt due to the protests by the Hausa Community in Port Harcourt over the death of their kinsman.

The Chairman of Arewa Consultative Forum, Musa Saidu, who identified  the victim said the remains of the late Yusuf would be buried today in Port Harcourt according Islamic rites.

While calling for calm among the aggrieved Hausa Community, he insisted that  the Arewa Community would follow up the matter to ensure those involved in the scuffle between members of the Rivers State Taskforce on illegal Street Trading, illegal Markets and motor spare parts that led to the death of the 75 years old operator of  Bureau de Change, were brought to justice.

In same vein, the Civil Rights Council, Rivers State has called on the Police in the state to urgently commence the investigation into the circumstance that led to the death of Yusuf, on Tuesday who reportedly died in a clash with members of Rivers State Task Force on illegal Motor park and street trading.A statement jointly signed by the State Chairman of CRC PRINCE WIRO and State secretary Kelechi Uzoma called on the Police to ensure any one or group of persons found culpable during the course of investigation be made to face the full wrath of the law.

The Council equally called on members of the Hausa community in the State to be calm and not to take laws into their hands while the Police is conducting investigation.

The Council called on the Secretary to Rivers State Government, Dr.Tammy Danagogo whose Office is responsible for supervision of the Task Force to put measures in place to prevent human rights abuses and also address complaints of  rights abuses from the general public by the Task Force.

‘’The Council is highly disturbed by several reports of assault and right abuses perpetrated against members of the public by the Task Force. We urge members of the Task Force to exercise caution in the discharge of their duty and make respect for human right their priority.’’

Meanwhile, Bright Amaewhule, Special Adviser to Governor Nyesom Wike on Rivers State Taskforce on Illegal Street Trading, Illegal Motorparks and Illegal Mechanics has in a press statement exonerated members of the Taskforce from the alleged killing of a Bureau de Change agent around Rumuola axis.
“I want to state categorically that the Rivers State Government did not initiate the Taskforce to kill any of her citizens, rather it is aimed at restoring sanity and standard way of living among its citizens.
“Therefore, the Rivers State TaskForce on Illegal Street Trading/ Illegal Motor Parks/ Illegal Mechanics dissociates itself from what it called misleading information being peddled by those who seek to defame the Rivers State Government in such negative manner,” he said.
Tags:   Bureau De Change   Ladan Yusuf   Rivers state Police Command