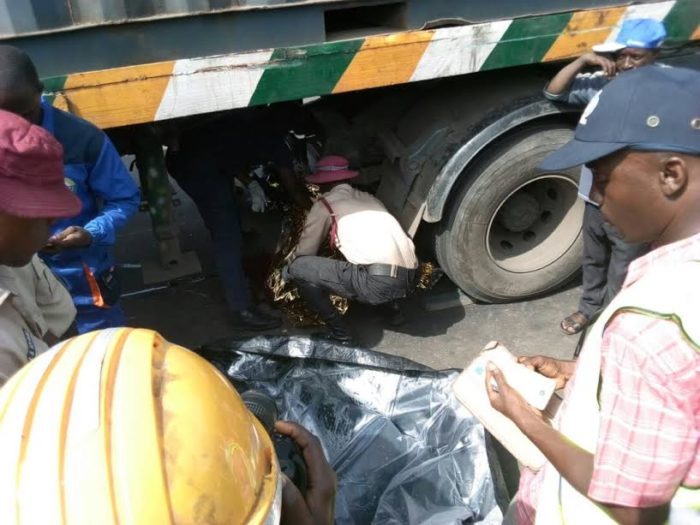 FRSC officials trying to retrieve the remains of the okada rider crushed by the trailer.

The Federal Road Safety Corps (FRSC) says a total of 1,086 road crashes involving tankers and trailers were recorded across the country in 2019.

The Corp Marshal, Mr Boboye Oyeyemi, made the disclosure while presenting a paper titled Improving Road Safety in Haulage Operations Through Truck Transit Scheme (TTC), on Thursday in Kaduna.

The corps marshal spoke at a sensitisation programme on trucks transit parks, organised by the FRSC and Nigerian Shippers Council, with the theme: ‘Truck Transit Park: A Panacea for Crash-free Haulage operations in Nigeria’.

The corps marshal, who was represented by ACM Victor Nwokolo, said 722 trailers and 361 tankers were involved in the accidents during the period, in which 362 people were killed and 1, 282 injured.

He explained that the purpose of TTS truck transit scheme is to promote road safety and security of cargoes and haulage vehicles while on transit.

The corps marshal added that it was also to reduce pilferage and theft of cargoes, delays and deviation into another territory.

He identified some of the challenges in truck transit park management to include prevalent operational setbacks on enforcement.

Oyeyemi said Nigeria has lost billions of naira from truck crashes resulting from drivers fatigue, indiscriminate parking along major corridors and other unwholesome practices carried out by the truck drivers.

“The truck transit scheme is therefore apt at a time the country is feeling the negative effects such a loss has on our GDP.

“To eradicate road traffic crashes involving truck drivers as a result of driving fatigue and other factors, the construction of truck transit park along the major corridors is necessary.

“Federal Road Safety Corps through its various policies and intervention programmes will continue to contribute to the full implementation of the scheme towards improving road safety in Nigeria.”

Bello who was represented by the council’s Director Inland Transport Service, Mr Nathaniel Makinde. said when transport systems are efficient, they provide economic and social opportunities and benefits.

He said that such benefits result in positive multiplier effects such as better accessibility to markets, employment, and additional investments.

He, however, noted that a deficient transport system leads to lower economic gains, missed opportunities and lower
quality of life.

Bello said the Shippers Council is promoting the development of TTP projects across the country on a Public-Private Partnership in line with the Federal Government’s policy to address the infrastructure deficit in the country.

“The TTPs can also serve as a logistics chain in relation to the movement of cargo as a dispatch centre.

“The TTPs is a common user facility with public authority status equipped with fixed installations and offering services for handling and temporary storage of cargoes carried under customs control for home use, warehousing, temporary admissions, temporary storage for onward transit and cargo aggregation centers.

“It is also hoped that dispatch of cargo can also take place from the TTP facilities,” he said.