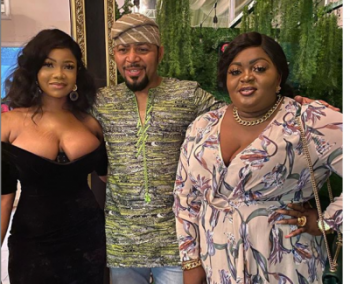 Tacha simply caused ‘go-slow’ at the party with her alluring wears, inviting lustful men to prey on her vanity.

At the event which held on Thursday, Tacha who took picture with Nollywood stars, Ramsey Noah and Eniola Badmus, exposed almost all her boobs.

The photo was displayed on the Instagram page of Eniols Badmus, where several fans attacked her for putting on such outfit.

According to a bbnhousemates, “Tacha has no sense of style. 😩 Wardrobe malfunction.”

An Instagram user by the name, mysamo eleniyan commented: “See Breast everywhere, which kind pikin be this?”

According to favychiyere,, “What is she putting on…‘this is so irritating 😠 gosh.”

Tacha, whose real name is Anita Natacha Akide, is a former Big Brother Naija housemate, video blogger and Instagram influencer who was disqualified  on the 89th day of the show for fighting with fellow housemate, Mercy in the 2019 BBNaija reality show.