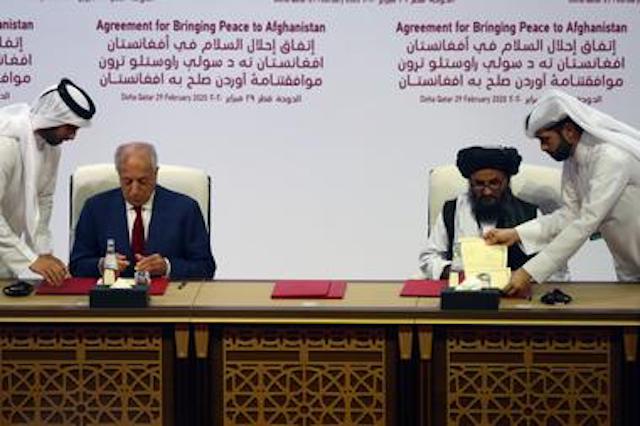 Mullah Abdul Ghani Baradar, the leader of the Taliban delegation, and Zalmay Khalilzad, U.S. envoy for peace in Afghanistan sign the agreement

Representatives of the United States and the Taliban, on Saturday, signed a long-negotiated agreement in the Gulf State of Qatar, marking a major step in the Afghan peace process.

The agreement is to initiate a gradual withdrawal of U.S. troops from Afghanistan and lead to intra-Afghan peace talks.

According to a joint declaration, published by the U.S. and Afghan governments on Saturday in Kabul, the U.S. and NATO would withdraw all troops in Afghanistan within 14 months, if the Taliban upholds the commitments made in the agreement.

U.S. Special Envoy for Afghanistan Reconciliation, Zalmay Khalilzad, and the Taliban’s co-founder and political chief, Mullah Abdul Ghani Baradar, signed the peace agreement in a ceremony held at the Sheraton Hotel in Doha, the capital of Qatar, where most of the talks between the two sides took place over more than one and a half years.

U.S. Secretary of State, Mike Pompeo and representatives from over two dozen countries and international organisations, among them the foreign ministers of Pakistan and Turkey, witnessed the event.

WHAT IS THE AGREEMENT?
– The deal includes a timeline for the withdrawal of all U.S. and NATO troops from Afghanistan as well as guarantees from the Taliban that it will prevent militant groups including al-Qaeda from using Afghan soil to threaten the security of the United States and its allies.

– The agreement was signed in the Qatari capital Doha, which is the Taliban’s political headquarters and has hosted talks over the past year and a half.

– The agreement lays the groundwork for negotiations between the Taliban and the Afghan government – known as intra-Afghan talks – to end a war that began after the United States launched attacks on Afghanistan after the Sept. 11, 2001 hijacked plane attacks.

– A full withdrawal of all U.S. and coalition forces would occur within 14 months of this deal getting signed, if Taliban fulfil their end of the deal, according to the text of the agreement.

– Up to 5,000 Taliban prisoners will be released and the Taliban will release up to 1,000 prisoners by March 10, according to the text of the deal.

– The United States will work with the UN Security Council to remove Taliban members from sanctions by May 2020, the accord says.

– The next step would be for negotiators to work out an agreement for comprehensive ceasefire and the future governance of the country. Officials and experts say this will pose serious challenges as the Afghan government has until now been sidelined.

– Even before getting to talks with the Taliban, Afghanistan’s two main political rivals – President Ashraf Ghani and Chief Executive Abdullah Abdullah – must settle a dispute over which officials, opposition members and activists should negotiate with the insurgents.

– That process was further complicated last month by competing victory claims by Ghani and Abdullah in a disputed Sept. 28 election.