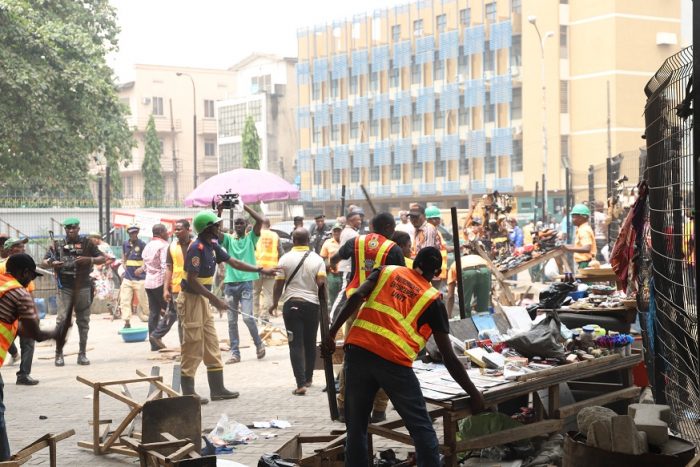 The Special Committee on Clean-up of Ikoyi and Victoria Island on Friday took its campaign to restore sanity to Obalende as the operatives dislodged illegal parks, garages, vehicles operators and traders who converted the green areas and Obalende under-bridge to bus parks.

No fewer than 42 people were arrested and 38 vehicles impounded during the operation.

The operatives also eased traffic as several commercial vehicles who park on Obalende road had such vehicles towed away by towing vehicles supervised by LASTMA.

The team also sealed up several shanties acting as brothels and arrested several women of easy virtues who resided in the shanties which also serve as abode to several people with questionable characters .

The operation which involved all the enforcement teams visited Odoo street, Ojo street, Obalende road, Passport Road and Keffi where illegal structures were dismantled and the items on sale confiscated.

At the Obalende roundabout, near the Police Force Headquarters Annex, an illegal market near the canal was sealed up with all the items seized.

The enforcement lasted for several hours and all illegal structures that harboured miscreants and shanties were dismantled while the team ensured that the wreckage were carted away by LAWMA trucks as the operation progressed.

Some commercial vehicles were impounded at a beautification space that was converted to a motor park and many street traders selling were dislodged and their wares confiscated by KAI operatives that were part of the team.

Also a car that drove against the traffic at the frontage of the Ikoyi Cemetery along Obalende Road was towed and the driver was arrested by the officers of the Task Force.

The enforcement team which was led by the Director of Operations, Mr. Ayo Williams while giving an insight into the operation, said a total of 42 people were arrested for various Environmental Offences and 38 vehicles of different types impounded.

He added that those arrested were charged for various Environmental Offences and immediately prosecuted accordingly by the Lagos State Special Offences Mobile Court which sat at the premises of Transfer loading station in Sura, Lagos Island.

He emphasized that as the Clean- Up exercise continues, the team would secure all the cleared open spaces to prevent the return of the miscreants within IKoyi and Victoria Island axis.

Tags:   lastma   Obalende   Special Committee on Clean Up of Ikoyi and Victoria Island