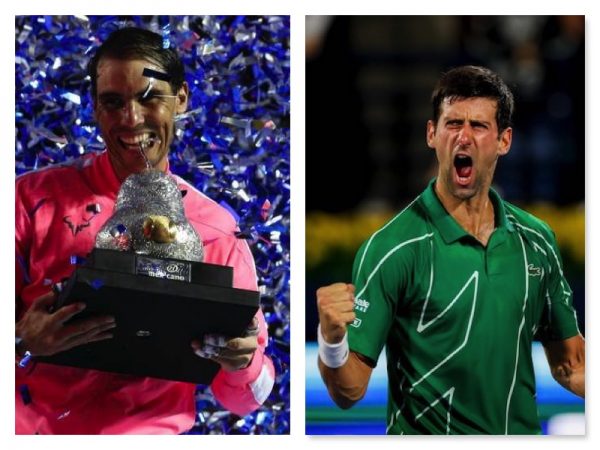 Nadal and Djokovic: both won titles at the weekend

Rafael Nadal World number two tennis player has captured his first title in 2020, easily defeating unseeded Taylor Fritz in straight sets, 6-3, 6-2, in the final of the Mexico Open on Saturday.

The 33-year-old Nadal, playing in his first tournament since losing in the quarter-finals at the Australian Open last month, didn’t drop a set all week and improved to 19-2 all-time at this event.

“I couldn’t be happier. I played a great event from the beginning to the end,” Nadal said.

“Acapulco was the first big title that I won in my career, so to be able to stay here after 15 years is amazing.

“I can’t thank enough the people who make me feel at home every single time.”

Nadal wasted no time figuring out Fritz’s game in the first career meeting between the two.

The 19-time Grand Slam winner made eight unforced errors and needed just one ace but it came in the final game of the second set to get to championship point.

Nadal closed it out with a blistering serve that handcuffed Fritz and gave Nadal his 85th career title.

Nadal ceded the world number one ranking to Novak Djokovic after the Australian Open, where the Serb won a record eighth title.

Nadal could have regained the top spot with a win in Acapulco, but he also needed Djokovic to fail to reach the final in this week’s Dubai event. But Djokovic extended his win streak to 21 matches by beating Stefanos Tsitsipas 6-3, 6-4 Saturday to lift his 5th Dubai trophy.

Nadal won the final eight points to take the first set. He seized control by breaking Fritz’s serve in the ninth game to go up 5-4. He then served for the set, winning four straight points.

On set point he hammered a serve which Fritz barely got back. That set up an overhead smash for Nadal which he put away nicely.

Nadal broke Fritz twice in the second set, including the fifth game to go up 3-2. He broke Fritz again to take a 5-4 lead and then served out the match.

In the women’s final, seventh seeded Heather Watson captured her first WTA title in three years by grinding out a 6-4, 6-7 (6/8), 6-1 win over Canadian teen Leylah Fernandez.

Novak Djokovic set his sights on another marathon run of invincibility after capturing his 79th career title on Saturday.

The world number one claimed the Dubai Championships for the fifth time, defeating Stefanos Tsitsipas 6-3, 6-4 in the final.

Djokovic is now on an 18-0 winning run this season, and 21-0 overall since late 2019, as he ended an eight-match win streak for his Greek opponent, champion last weekend in Marseille.

Djokovic claimed his third trophy of 2020 after helping Serbia to the ATP Cup and winning an eighth Australian Open.

It is the seventh time that the 32-year-old Djokovic has won more than 20 matches on the trot.

“This has been one of the best starts of all seasons I’ve had. I feel great on the court,” said Djokovic.

Next up for Djokovic will be the season’s first Masters events, back-to-back hard court assignments at Indian Wells and Miami.

After that will be European clay and an eventual assault on a second French Open title and 18th major.