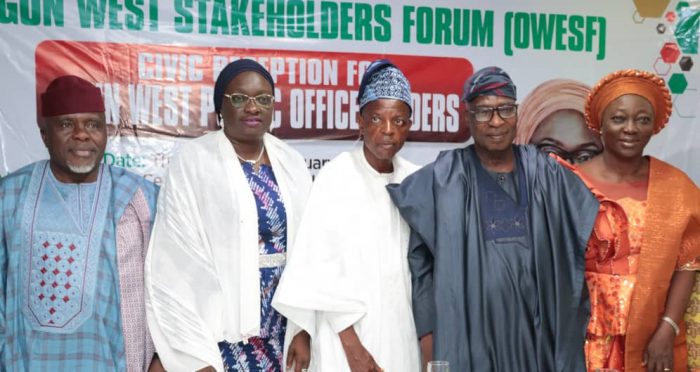 Ogun Deputy Governor, Engr. Noimot Salako-Oyedele and the stakeholders at the event.

Ogun State Deputy Governor, Engr. Noimot Salako-Oyedele, has said that the good governance policy of Governor Dapo Abiodun led government would continue to ensure even distribution of dividends of democracy across the three senatorial districts of the state.

She said the Governor has assured of all-inclusive governance in his developmental agenda, saying this was evident with some investments in Ogun West, as well as other senatorial districts of the state.

“His Excellency, has said that one of the biggest socio-economic bio meters anywhere is the condition of the roads and when we went across the state during campaigns, we found out that the issue of roads was the number one on people’s agenda, so we have decided to work across the state so that no part of the state is left out.

“We have done some rehabilitation and reconstruction and soon we will be going to next phase of the roads and also ensure that the major roads that link the state with economic activities, schools, health centres are given priority because of it impacts on the lives of our people”, she said.

Earlier in his welcome address, Chairman OWESF, Dr Yemisi Bamgbose, urged people from the district to unite for progress of the area and avoid things that could bring division, calling on his kinsmen to develop confidence in themselves, guard their integrity and attract development for Ogun West.