SERAP sends warning to Lawan over bill for repentant terrorists 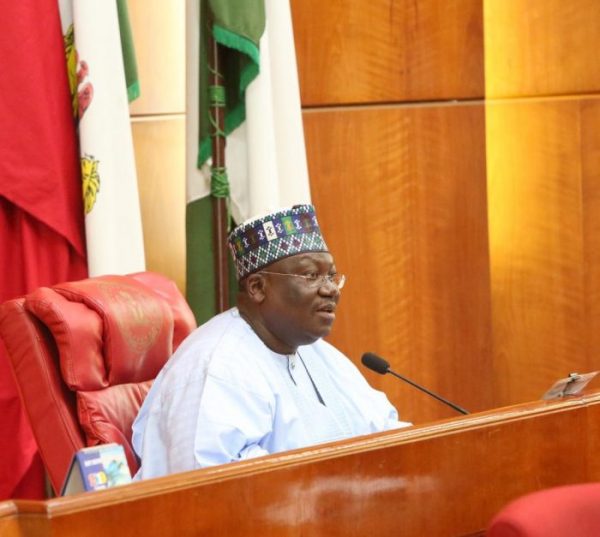 The Socio-Economic Rights and Accountability Project (SERAP), an NGO, has called on Senate President Ahmed Lawan to ensure that the bill seeking foreign education for repentant terrorists is dropped.

In a statement issued by SERAP on Sunday, its Deputy Director, Kolawole Oluwadare, said that the group made the caution in an open letter to the senate president on the issue.

Oluwadare said that the group told Lawan to ensure that the bill that would allow ‘repentant Boko Haram terrorists’ opportunities to access public funds to enjoy foreign education is immediately dropped.

The group, however, called on the Senate to sponsor bills that would ensure access to justice and reparation for the victims of Boko Haram terrorist group.

“Such bills that would ensure adequate reparations for victims of Boko Haram atrocities and accelerate effective prosecution of alleged repentant Boko Haram members.”

According to SERAP, the bill, which has passed first reading at the Senate, would give opportunities to “repentant terrorists” to receive foreign education including accessing funds from the Universal Basic Education Commission, the Tertiary Education Trust Fund and subventions from the government.

The group criticised the bill, saying it eroded justice and made a mockery of the suffering of victims and the unspeakable human tragedy, humanitarian crisis and appalling atrocities committed by the Boko Haram terrorist group.

“By calling Boko Haram members ‘ex-agitators’, the bill mocks the victims of appalling atrocities committed by the terrorist group, and is a blatant affront to victims’ dignity.”

The group maintained that repentant Boko Haram terrorists were not ‘ex-agitators’ but were terrorists under Nigerian and international laws.

“Boko Haram members should not be allowed to enjoy foreign education while over 13 million Nigerian children of school age are roaming our streets.

“Alleged perpetrators of gross violations should not get the benefits at the expense of these and other deserving children.

“Rather than allowing perpetrators to access public funds to enjoy foreign education, the senate should be promoting reparation for victims, to prevent future criminality and ensure the best interest of justice.”

SERAP held that should the bill became law, it would take all legal actions nationally and internationally to challenge the legality of such law and ensure that it was never implemented.

“Prioritising the education of Boko Haram members over the rights of Nigerian children to quality education is discriminatory.

“This bill serves neither justice nor the public interest; the bill also does not represent value for money for Nigerian taxpayers.

“Without justice, the seeds of future criminality and militant terrorism will grow. This bill, if passed, would only lead to more terrorism and suffering,” the letter read in part.

The group added that the bill, sponsored by Sen. Ibrahim Geidam (APC-Yobe East) had passed first reading in the Senate.