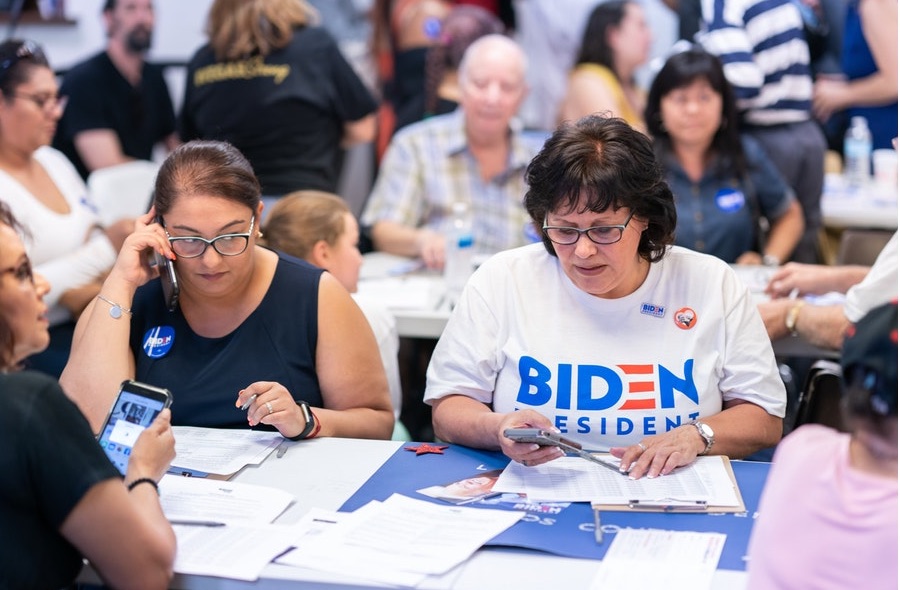 Joe Biden supporters rallying the faithful to vote on Saturday

Former US Vice-President Joe Biden appeared to have had South Carolina locked up in his pocket as polls close and counting begins in the Democratic presidential primary on Saturday.

According to exit polls, nearly eight of 10 voters in the state said they have a favourable view of Joe Biden, compared with five of 10 who see rival Bernie Sanders favourably – a good early sign for Biden in the pivotal early nominating state.

The polls by Edison Research also found about six of 10 of South Carolina voters said influential congressman James Clyburn’s endorsement of Biden earlier this week was a factor in their decision.

About half want a candidate who will return to Democratic President Barack Obama’s policies, a key argument of Biden, who was Obama’s vice president.

Biden is aiming for a decisive win in South Carolina – the fourth state to weigh in on the Democratic race to find a challenger to Republican President Donald Trump – to resuscitate his struggling campaign against Sanders, the national front-runner and a progressive U.S. senator from Vermont.

The early polls found more than half of those who had cast their votes in South Carolina were black, and Biden was the big winner among them. He even beat Sanders among those who consider themselves “very liberal,” the polls found.

The contest in the Southern state is taking place just three days before Super Tuesday elections in 14 states, which will award one-third of the available national delegates in a single day.

With its large African-American electorate, South Carolina is seen as a do-or-die stand for Biden, who remains popular among black voters.

The onetime front-runner faltered in national polls after poor showings in Iowa and New Hampshire, but his second-place finish in Nevada’s caucuses a week ago, while still far behind Sanders, gave his campaign fresh momentum.

For months, Biden’s campaign has argued the state would serve as a “firewall” given his strength among African-American voters, and Biden himself has suggested anything less than a victory would imperil his White House bid.

“He’s going to show them what he’s got,” said Allison Pryor, 57, a retired parole officer from Charleston who said she planned to vote for Biden.

Biden’s South Carolina effort got a boost on Wednesday when Clyburn, a black congressman from South Carolina and the No. 3 Democrat in the U.S. House of Representatives, endorsed the former vice president.

With Super Tuesday looming, Biden hopes a comfortable victory in South Carolina might be enough to blunt the momentum of Sanders, a democratic socialist who Democratic Party leaders worry might be too far left to beat Trump.