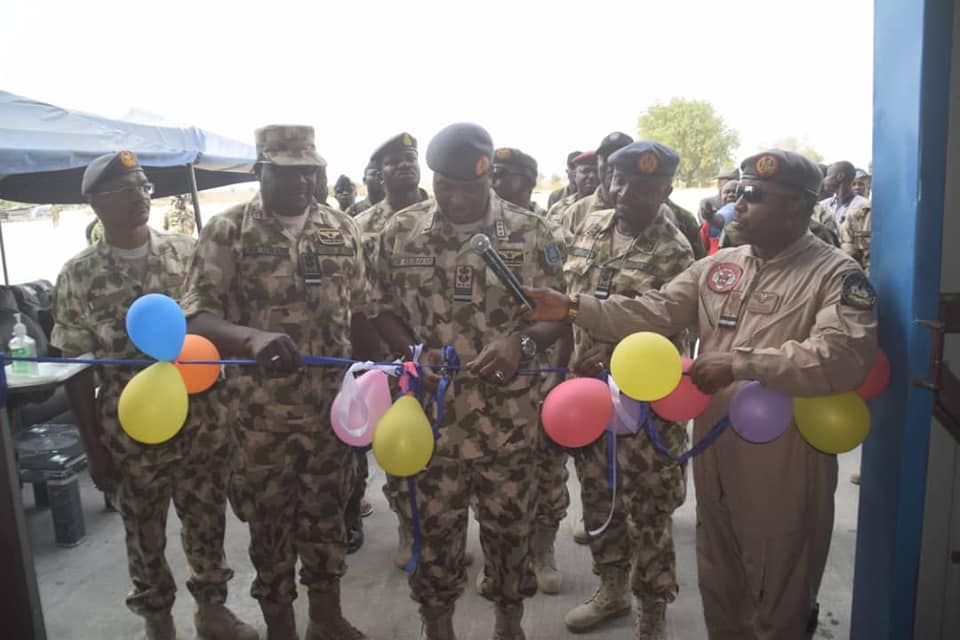 The Nigeria Air Force (NAF), says it has established an aircraft hangar at the 105 Composite Command, Maiduguri, to enhance its operations in the counter-insurgency campaign in the northeast.

The Chief of Air Staff (CAS), Air Marshal, Sadique Abubakar, made the disclosure at the inauguration of the hangar on Sunday in Maiduguri.

Abubakar disclosed that the hanger project was designed to enhance aircraft maintenance, provide an enabling environment and improve the wellbeing of personnel and motivate them towards effective service delivery.

He said: “The maintenance of aircraft is a major problem here; because the maintenance is usually done outside under high, hot temperature sometimes during sun storm.

“Now we can bring our aircraft into the hangar and do the maintenance in comfort; the airmen will be more relax, concentrate more and do a better job. They will also feel that the system is concern about them.

“Secondly; the harsh weather condition has a way of affecting the hydraulics of our aircraft because aircraft parked outside need silver covering in the cockpit to reflect heat away but if they are inside the hangar they do not need that.

“In essence, the aircraft is going to fly more, you will have more serviceable aircraft and you do not have difficulty in getting what you are required to do.

“And thirdly; it is cheaper, the whole hanger was dismantled from another Air Force unit where we feel it is not being utilized fully and we believed that bringing it here will serve the Air Force and Nigeria better.

“We brought it to Maiduguri and everything was done by our personnel of the Directorate of Services, headed by Group Capt. Abubakar, they came and put it together, the benefits are enormous.”

Abubakar reiterated commitment of the service to provide substantial equipment to meet the needs of personnel of the Air Task Force (ATF) Command of Operation Lafiya Dole, to ensure successful implementation of the counter-insurgency campaign.

While commending the personnel for their sacrifice and dedication, Abubakar urged them to display a high sense of commitment, discipline, and professionalism in the discharge of their duties.

Also speaking, AVM Precious Amadi, the ATF Commander, lauded the gesture, adding that it would go a long way to motivate and enhance its operations.

Amadi also commended the CAS over the provision of equipment, execution of accommodation and viable projects as well as capacity building and staff welfare programmes.

Abubakar is in Maiduguri to appraise the progress of the ongoing Operation “Rattle Snake III”.

The CAS was accompanied in the visit by AVM James Gwani and other senior officers of the service.