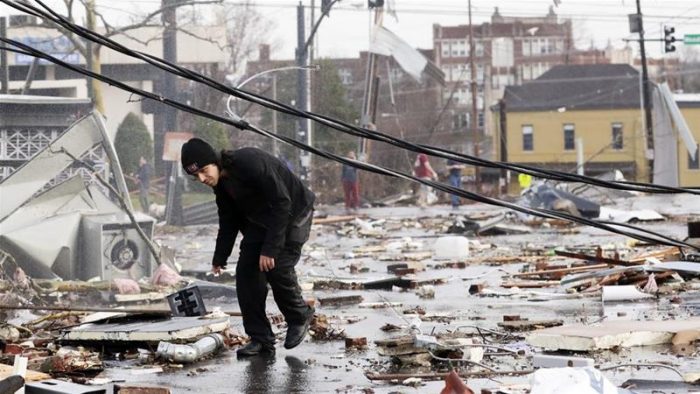 Death toll has reached 22 with many others injured in the tornadoes that ripped through the south-eastern U.S. state of Tennessee on Tuesday.

It was the same day the state was due to vote in the Super Tuesday Democratic primaries.

Tennessee Governor Bill Lee said “we have had loss of life all across the state. A very difficult situation.

“We have deployed teams across the state in a search and rescue effort to find those who were missing.’’

The storms left numerous homes and other buildings in ruins across several counties, and left tens of thousands of people without power and hundreds at least temporarily looking for another place to live, CNN reported.

It quoted Mayor John Cooper of Nashville as informing that 48 buildings collapsed with others damaged and about 150 people already taken to hospitals.

Tennessee is one of 14 states to vote in the Democratic primaries on Tuesday, and state officials were scrambling to ensure residents can still get to the polls after the storm, broadcaster NBC reported.

“Nashville is hurting, and our community has been devastated. My heart goes out to those who have lost loved ones”, Cooper added.