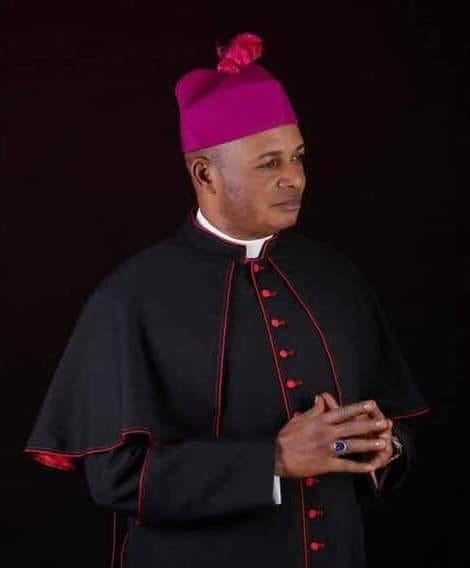 Bishop Goddy Okafor, one of the conveners of the meeting

Eminent religious leaders from the South-East and South-South have called for urgent end to insurgency and banditry, along with the wanton destruction of innocent lives and valuable property in Nigeria.

The call was contained in a 12-point communique issued in Umuahia by the clergymen at the end of their one-day colloquium on insecurity in Nigeria, with the theme: “The sacredness of life”.

It also discussed the state of the nation, its prospects and challenges on the people.

It further examined the “brutality and killing of Nigerians by security personnel, who are engaged and paid to protect lives and property of Nigerians” and “low morale of our security agencies.”

The meeting urged the Federal Government to seek the help of the international community in tackling terrorism and radicalism, if it hoped to achieve reconciliation and sustainable peace.

It advocated practical respect for the sanctity of human life, stating that the “violence that is conducted in the name of God, is a desecration of His name.”

It maintained that “The proper means of solving conflict and disagreement is by deliberate negotiation and dialogue only.”

The clerics also canvassed a solution to the nation’s security challenges that recognises the rights of Christians to exist in dignity.

“We vehemently call for the cessation of incitement, misrepresentation and distortion of the image of the other,” they added.

They called on the federal government to improve on intelligence gathering and deployment of modern technology to track and monitor the operations of the insurgents.

“There is urgent need to sincerely rejig and decentralise Nigerian security arrangement for efficiency,” they stated.

The meeting expressed support for the recent regional security arrangement in the Southwest to further secure their borders and communities.

It expressed concern over the “porosity” of the nation’s borders that “guaranteed free inter-country movement with little or no checks, worsened by the visa-on-arrival policy.”

It therefore called for more stringent measures to strengthen surveillance and security at the nation’s borders.

The religious leaders also expressed worry about the speed with which arrested terrorists were being released, rehabilitated and sent back to society as repentant terrorists.

“We are deeply worried why government should be pampering such killer terrorists, who have not in any way justified their action against Nigerians.

“This development is not only worrisome but demoralises the morale of gallant soldiers,” they further stated.

They urged states in the two geo-political zones to enact anti-open grazing law in order to preserve the farmlands and secure their people.

They further condemned the continued rape of helpless women and girls by armed herdsmen, describing the act as “an aberration and a total disregard for our rights as a people.

“We stand together to condemn this intrusion and call on all faith leaders to form a synergy to stamp out this slap on our faces as a people,” the clergymen added.

Earlier in an address of welcome, the convener of the colloquium, Bishop Sunday Onuoha, said that the event was an opportunity for them “to come together around shared values and shared commitment to building peace.”

Onuoha said: “It is time religious leaders stood together to demand accountability for the sacredness of human life and the ethical call to resist the violence that seeks to destroy it.

“If we cannot retaliate, we can at least put up some non-violent resistance to ensure security for the people we shepherd.

“Let us build bridges and strengthen the case against these killings, identify and speak out against injustices, monitor human rights and assist victims of violence.
The cleric warned that “an impending doom” loomed above the nation.

According to him, “A nation at war with itself will surely implode and disintegrate, if nothing is done to stop the carnage that has become the narrative.”

He said that government was under moral obligation “to respect, protect and enahnce the human life at every stage and context.”

“The passivity of our leaders is unacceptable because it continues to enable the radicality of evil and perpetuates this death-dealing violence we are faced with,” Onuoha said.

The communique was signed by representatives of the Chairman, Christian Association of Nigeria (South-South), Archbishop Israel Eniyekemini, and his South-East counterpart, Bishop Goddy Okafor.