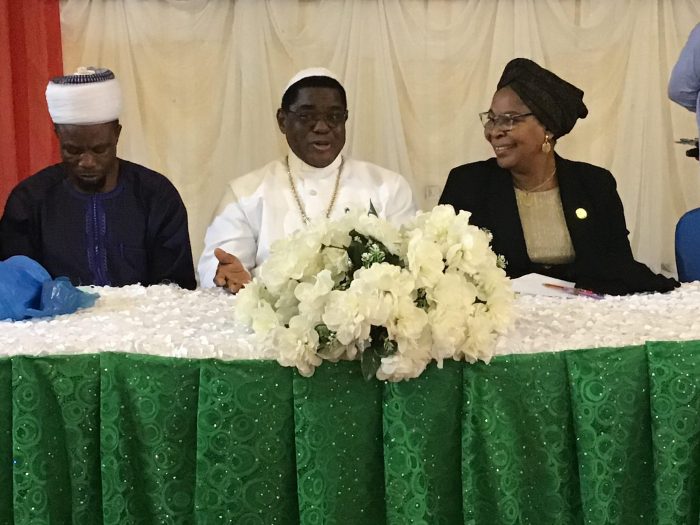 The Lagos State Government on Tuesday met with religious leaders in the state on the need to collaborate with government to halt the spread of the deadly Coronavirus.

At the meeting which took place at the Chapel of Christ the Light, Alausa, in Ikeja, Lagos, Southwest Nigeria, hundreds of religious leaders under the aegis of Nigeria Inter Religious Council (NIREC) paid keen attention as government officials sensitised them on the new disease.

Commissioner for Home Affairs, Prince Anofi Elegushi stated that the spread of the disease must be nipped in the bud before it becomes endemic in the state.

The commissioner, who was represented by the Permanent Secretary in the ministry, Mrs. Adewunmi Adekanye, said government could not afford to treat Coronavirus with kids glove as the lives of Lagosians is sacrosanct.”

“We will discover that religious colourations and sentiments are being introduced to this health issue; this is why we have invited you all to this briefing and sensitization programme to have a first hand knowledge of the causes, effect, prevention and possible treatment from experts who are drawn from various government agencies in the state,” he said.

Elegushi said the purpose of the gathering was for religious leaders to be able to educate their worshippers and congregation in their various churches and Mosque all over the state.

According to him, different segments of the society have already been sensitized while some others would still be sensitized and enlightened about what is needed to be done in order to avoid contacting the virus.

He said that “this discussion and sensitisation could not have come at a better time than this and as a responsible and responsive government, it behoves on us to bring our Religious Leaders up to speed on the unwanted disease that is subtly creeping into the state, the Corona Virus.”

Experts and resource persons who spoke at the event were drawn from: Ministries of Health, Environment and Water Resources, Information and Strategy, Local Government and Community Affairs and Special Duties and Inter-Governmental Relations.

One of the resource persons at the event, Dr. Bankole Akinwale who is also the Manager of the Lagos State Biobank Centre, explained that the virus depleted the immunity level of its host to multiply, adding that the Corona virus emanated from the animal habitat just like the Ebola virus and Lassa fever.

He attributed the scourge of the disease to urbanization which made the animal virus spread to the human space.

Akinwale revealed that the Lagos State Government as a responsible and a responsive government has set modalities in motion to combat the spread of the disease through the establishment of the Emergency Operation Center that ensured that health personnel were placed at the airports, border crossings and other entry points into the State to tackle any incidence of the virus head long.

He noted that the State is the first in Nigeria and indeed in Africa to set up a Biosafety and Biosecurity facility for diagnosis and treatment of the disease.

Chairman of CAN, Bamgbola said members of the body would embrace proper hygiene and support the government in its efforts to prevent the spread of the disease.

He said CAN leaders would go back and educate their church members support government to curtsil the spread of the disease.

Also, Mofesaye commended the state governor and his team for being proactive in handling the crisis situation.

He said members of the Muslims community would ensure that they kept their environment clean to avert spread of the disease, as well as engaged in prayers.

Also speaking, the Secretary General of  Conference of Islamic Organisation, CIO, Imam Balogun Luqman expressed the hope that the enlightenment session would go a long way in reducing the incidence.

He called for calm among residents of the State just as he solicited for precautionary measures on the part of every Lagosian.

Another Speaker, Dr. Ismail Abdulsalam, a Director of Epidemiology, Biosafety and Global Health from the Lagos State Ministry of Health said the State was fully prepared for the incidence as diagnosis and research parameter of preventive measures that would lead to local discovery of a potent solution was in gear.

He said “the State Government is proactive in mitigating the disease and any other infectious disease with it short, medium and long term solutions, all residents must cultivate the habit of personal and environmental hygiene by observing regular hand washing habit and proper disposal of refuse.”