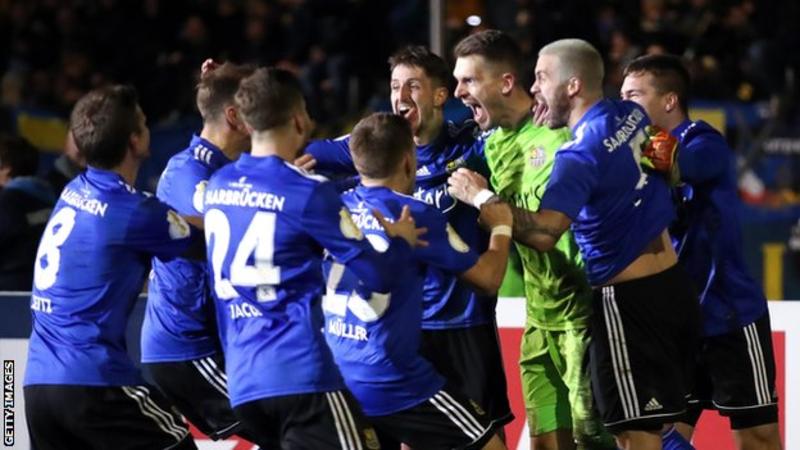 Holders Bayern Munich laboured into the German Cup semi-finals with a 1-0 win at Schalke 04 on Tuesday.

Also, Saarbrucken became the first fourth division side to reach the last four of the German Cup with a penalty kicks shootout win over Fortuna Duesseldorf.

Bayern Munich, who are aiming for a milestone 20th Cup triumph, were made to work hard by Schalke 04.

The home team missed several chances on either side of Joshua Kimmich’s 40th-minute winner.

Schalke 04 striker Guido Burgstaller hit the crossbar and then had a goal ruled out for a marginal offside before Kimmich volleyed home from the edge of the penalty area.

The home team’s forward Rabbi Matondo missed a sitter with a feeble close-range shot in the 64th minute after a fast break.

Bayern Munich were forced to hang on in the closing stages as Schalke 04 piled on the pressure.

However, Saarbrucken knocked out top-tier opponents Fortuna Duesseldorf in the day’s opening fixture as they won the penalty kicks shootout 7-6, with the absorbing contest ending 1-1 after normal and extra time.

Goalkeeper Daniel Batz was Saarbrucken’s hero as he saved five penalty kicks, one in normal time and four in the shootout, to send his side through.

The feat sparked wild celebrations among the jubilant home fans.

Midfielder Tobias Janicke fired Saarbrucken ahead in the 31st minute with a neat finish.

However, Mathias Jorgensen levelled with a late header to force extra time after Batz had kept out a Rouwen Hennings penalty kick.

In the other two quarter-finals, Bayer Leverkusen entertain Union Berlin and Eintracht Frankfurt are at home to Werder Bremen on Wednesday.