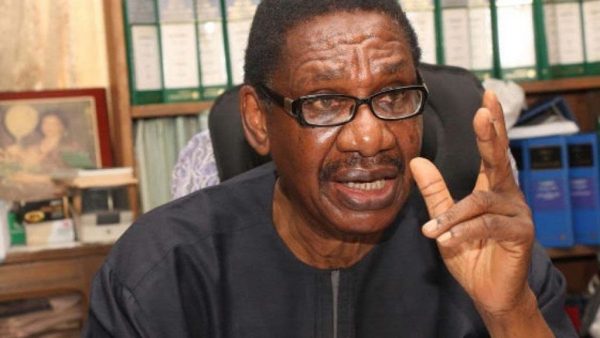 Prof. Itse Sagay: says 1999 constitution should be scrapped and reinstate the 1963 constitution

The Presidential Advisory Committee against Corruption (PACAC), on Wednesday said the Federal Government recovered N594.09 billion in three years through implementation of the whistleblowing policy.

Prof. Itse Sagay, Chairman PACAC, said this at a two-day Roundtable on Whistle Blowing for Revenue Generating Agencies in Nigeria, organised by the African Centre for Media and Information Literacy (AFRICMIL) in collaboration with PACAC.

Sagay said that the whistleblower policy was introduced by the Federal Government in 2016 to encourage Nigerians with information about violation or corruption to report through a secured online portal designed to conceal identity of the blower.

He added that the policy created a reward system for informants who led to recovery of funds as they received between 2.5 and 5.0 per cent of the total amount recovered.

“The policy has been very successful, not only in terms of assets actually recovered through information provided by whistleblowers but also by revelation of the infinite variety of scams used by fraudulent Nigerians in swindling government and people of Nigeria.

“The Ministry of Finance’s analysis of the type of infractions reported in 791 cases was most revealing with the highest being 148 cases from embezzlement of funds meant for payment personnel emoluments with 113 cases completed.

“Embezzlement of salaries of terminated personnel amounted to 62 completed case while failure to implement projects for which funds have provided amounted to 61 ongoing cases.

“Violation of TSA regulations by keeping funds in commercial banks amounted to 58 completed cases, diversion of revenue totalled 54 cases others are illegal recruitment 33 cases violation of procurement Act 36 among others, ’’ he said.

Sagay said that some Nigerians abroad had suggested that the policy should be extended to foreign countries to expose Nigerians who looted funds and government should on appropriate tip off contact the FBI in U.S to investigate them.

He said that the idea was worthwhile deserving of consideration by anti-corruption agencies and maintained that there was need to convert the whistle-blowing policy into an Act.

He said this was to encourage people to come out with information that would lead to recovery of assets as leaving it as a policy might create doubt on government’s reward to people.

Mr Clem Agba, Minister of State for Budget and National planning represented by Dr Philip Ugbodaga, his Special Adviser committed to considering suggestions on the prospects of entrenching whistleblowing in the budget-making phase.

Agba said that this would be done through a system wide-reform initiative that will enable prevention of corruption opportunities early in the life cycle of government expenditure process which usually begin with the budget preparation process.

AFRICMIL Coordinator, Dr Chido Onumah, said that the centre enlisted the support of PACAC to organise the workshop as part of its support for anti-corruption fight.

Onumah said that the aim was to highlight the necessity of whistleblowing as a way of checking rampant corruption in the regulatory and revenue generating institutions.

He said that the policy in spite of challenges of legal framework had achieved considerable success in recovery of huge amounts of looted public funds in local and foreign currencies as well as assets.