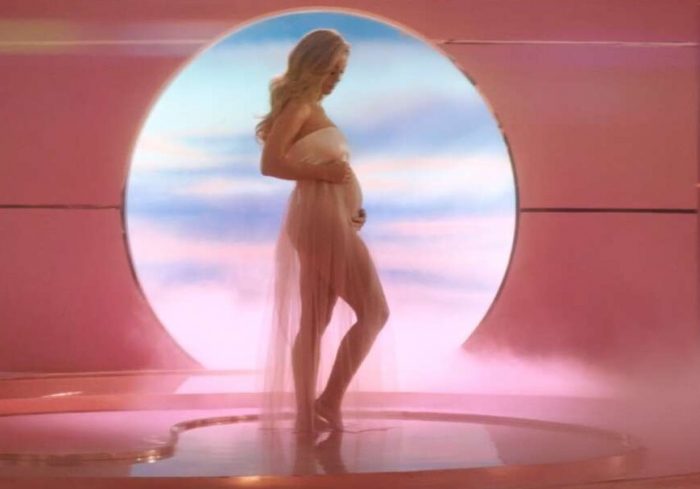 But along with the romantic and dreamy-like vibe of the video, the 35 year-old Katy also dropped some exciting news: She’s pregnant with her first child!

A moment in the music video got her over 90 million Katycats talking: it was a shot of the “Roar” singer cradling her baby bump.

Both the video and her Instagram post showing her in a white gown and the baby bump up-close, have elicited messages of congratulations from her fans.

“CONGRATS😭💖 you’re gonna be the best mama!!”, another of the over 6500 commenters said.

Born as Katheryn Elizabeth Hudson on 25 October, 1984, she rose to fame in 2008 with her second album, One of the Boys, a pop rock record containing the singles “I Kissed a Girl” and “Hot n Cold”.

Her third album, Teenage Dream (2010), ventured into disco, and was her first record to top the U.S. Billboard 200. It peaked at number one on the U.S. Billboard Hot 100 with the singles “California Gurls”, “Teenage Dream”, “Firework”, “E.T.”, and “Last Friday Night (T.G.I.F.)”, while “The One That Got Away” reached number three on the chart.

The album became the first by a female artist to produce five number one songs in the U.S., and the second overall after Michael Jackson’s Bad.

In 2012, Perry re-issued the album as Teenage Dream: The Complete Confection, which produced the songs “Part of Me” and “Wide Awake”. Her next record was Prism (2013), which became her second to top the U.S. charts. It is influenced by pop and dance, and she became the first artist with multiple videos to reach one billion views on Vevo with the videos for its songs “Roar” and “Dark Horse”.

She followed this with 2017’s Witness, which delved into electropop and became her third album to chart at number one in the U.S. “Chained to the Rhythm” was the album’s most successful single, breaking Spotify’s record at the time for most first-day streams for a song by a female artist.