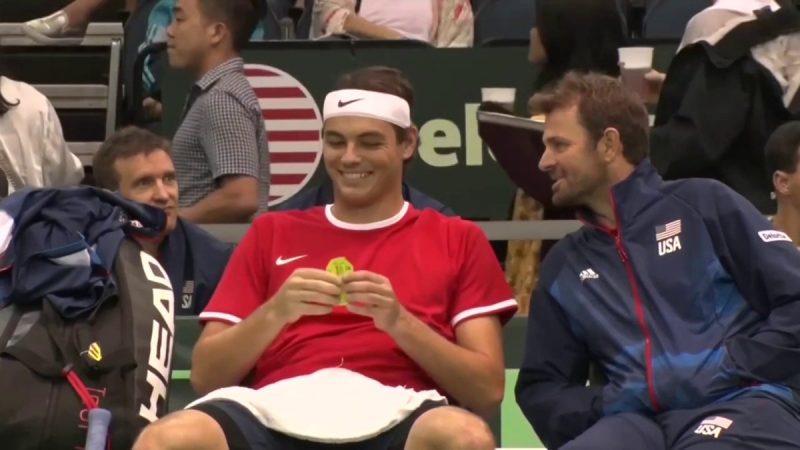 Mardy Fish, right, has his hands in his pockets as he joked with Taylor Fritz in Honolulu

The fear of the deadly coronavirus impacted the ambience of the Davis Cup as the qualifying matches started Friday in various countries.

Instead of the usual conviviality, fist bumps replaced handshakes, ball boys and girls kept their distance from sweat-stained towels and two ties even played out in eerily-empty arenas.

With matches taking place from Australia to Japan to Europe and in South America and Hawaii, 12 teams are bidding to join defending champions Spain, 2019 runners-up Canada, semi-finalists Great Britain and Russia, as well as wildcards France and Serbia in the Madrid finals in November.

Two of Friday’s encounters had to be staged behind closed doors with spectators banned in Miki, where Japan are hosting Ecuador, and in Cagliari as Italy faced South Korea.

“Conditions were strange,” said Italian number one and world 11 Fabio Fognini after cruising past 251-ranked Lee Duck-hee 6-0, 6-3 in just over an hour at the Circolo Tennis venue.

“It was not difficult to focus but it was a bit strange to play in front of 100 people. But safety first and then sport,” Fognini told daviscup.com.

Italy has been the worst-hit European country with 197 deaths from the coronavirus.

As a result, all sporting events are being played behind closed doors for the next month.

On Friday, only teams, media and support staff were allowed into the arena where world number 79 Gianluca Mager then extended the Italian lead to 2-0 overnight after a 6-3, 7-5 debut win over Nam Ji-sung.

“There’s too much silence for a Davis Cup crowd,” said Italy skipper Corrado Barazzutti after a day in which players and backroom staff exchanged fist bumps rather than the traditional post-match handshake in an effort to reduce the risk of a virus spread.

In Miki, Japan, without their top two singles players Kei Nishikori — who hasn’t played Davis Cup since 2016 — and Yoshihito Nishioka, slipped 2-0 down to Ecuador.

Ball boys and girls wore gloves to handle the balls and used baskets for players to toss their towels.

Japan has reported 360 confirmed cases of coronavirus and six deaths.

It all added to a miserable day for Japan who were without Nishikori, still recovering from an elbow injury which has sidelined him since the US Open, and Nishioka.

World number 48 Nishioka decided not to join the national team to avoid the possibility of being quarantined on his return to the United States ahead of next week’s ATP event in Indian Wells.

Elsewhere, 28-time Davis Cup champions Australia were 2-0 up on Brazil in Adelaide.

“That’s what Davis Cup is all about, never giving up,” said Millman.

In Bratislava, three-time champions Czech Republic were 2-0 ahead of Slovakia in their first meeting since the countries split into two independent nations in 1993.

Sweden were 1-1 with Chile in Stockholm on a contrasting day for the home side’s Ymer brothers.

Other ties were also locked at 1-1 — Kazakhstan v Netherlands, Austria against Uruguay, Hungary at home to Belgium, Germany’s tie with Belarus and Colombia v Argentina.

The qualifying round will be completed on Saturday when each tie will feature a doubles clash and reverse singles.