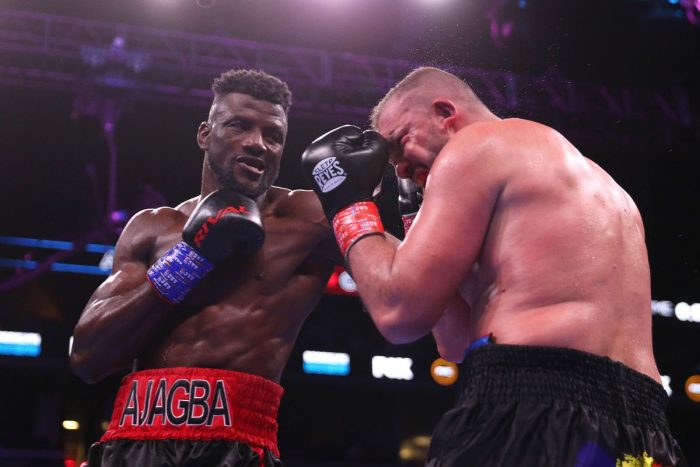 The 6-feet-6, 242¼-pound prospect knocked down Cojanu twice before their scheduled 10-rounder was stopped at 2:46 of the ninth round on the Adam Kownacki-Robert Helenius undercard at Barclays Center in Brooklyn. Referee Ron Lipton ended their bout as soon as the 6-feet-7½, 255½-pound Cojanu took a knee after absorbing another thudding right hand from Ajagba (13-0, 11 KOs).

Romania’s Cojanu (17-7, 9 KOs) was knocked out for the fourth time in nine years as a pro. Each of his first three knockout defeats – to Donovan Dennis, Luis Ortiz and Daniel Dubois – occurred in the second round.

Ajagba suffered his first knockdown as a pro or amateur in his prior bout, a fifth-round TKO victory over Iago Kiladze on December 22 in Ontario, California.

Ajagba dropped Kiladze in the second round of that bout and hurt him again in the third round, but Kiladze came back to drop him with a right hand late in the third. Ajagba got up, regained control and floored Kiladze again in the fifth round, when Kiladze’s trainer, Shadeed Suluki, eventually threw in the towel.

The 25-year-old Ajagba wasn’t exactly spectacular Saturday night, but he didn’t have any real difficulty with the game Cojanu, Boxing Scene reports.

A left-right combination stopped Cojanu in his tracks at about the midway mark of the ninth round. Another punishing right by Ajagba later in the ninth made Cojanu take a knee for the second time in as many rounds.

Lipton quickly waved an end to the fight after Cojanu went down late in the ninth round.

Ajagba’s hard right hand and subsequent combination made Cojanu take a knee with just under a minute remaining in the eighth round. Cojanu answered Lipton’s count, but Ajagba blasted him with another left hook that wobbled Cojanu with 20 seconds to go in the eighth.

Lipton appeared on the verge of stopping the fight after Cojanu moved back toward the ropes. Cojanu threw a hard shot at Ajagba, though, which convinced Lipton to allow the fight to continue.

A right-left-right combination by Ajagba got Cojanu’s attention about 45 seconds into the sixth round. Cojanu nailed Ajagba with a low blow that caused Lipton to give Ajagba time to recover with 1:40 to go in the sixth round.

Once the action resumed, Ajagba blasted Cojanu with a hard right hand. Cojanu fired back, though, to prevent Ajagba from capitalizing on landing that punch.

Lipton warned Ajagba for a low blow about 55 seconds into the fifth round. Cojanu continued taunting Ajagba toward the end of the fifth round, as Ajagba backed him up by throwing hard right hands.