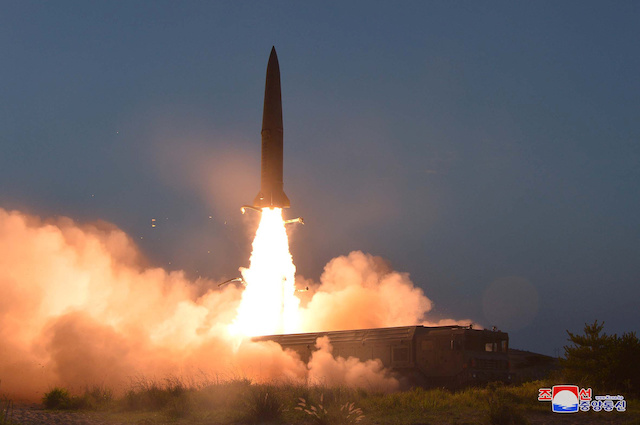 Not bothered by coronavirus fears, North Korea fired three unidentified projectiles into the sea on Monday, Seoul’s military said, the second such weapons test by Pyongyang in a week.

The three devices were fired in a northeasterly direction from the Sondok area in South Hamgyong province, the South’s Joint Chiefs of Staff said in a statement, without further details.

“The military is monitoring for additional launches and maintaining readiness,” it added.

A spokesman at Japan’s defence ministry said North Korea launched what appeared to be “ballistic missile(s)”, adding there had been no indication of anything coming down in Tokyo’s territory or exclusive economic zone.

Analysts say the North has been continuing to refine its weapons capabilities during its long-stalled nuclear discussions with the US, which have been at a standstill since the collapse of the Hanoi summit between leader Kim Jong Un and President Donald Trump more than a year ago.

Vipin Narang of the Massachusetts Institute of Technology added: “Kim continues to test, improve, and operationalize his force.”

After last week’s launch the North’s state media said Kim had overseen a “long-range artillery” drill, carrying images of multiple launch rocket systems and several of a larger calibre rocket being fired in a forest.

South Korea said that launch appeared to be two short-range ballistic missiles — which the nuclear-armed North is banned from testing under UN Security Council resolutions.

Monday’s launch came days after Kim sent a personal letter to the South’s President Moon Jae-in, offering “comfort” for the rapid outbreak of the new coronavirus in the country.