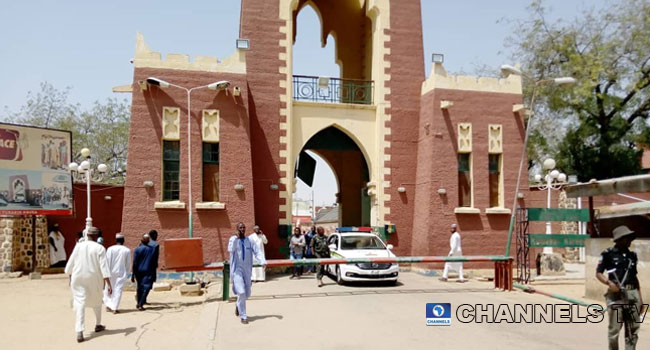 The new Emir to replace Muhammadu Sanusi is expected to be announced “soon.”

This was confirmed by the Secretary to the Kaduna State Government, Usman Alhaji while announcing the sacking of Muhammadu Sanusi II as the Emir of Kano on Monday.

Usman Alhaji also explained that Sanusi was removed to preserve the sanctity of the Kano Emirate.

“A new Emir of Kano will soon be appointed,” he said in a statement issued on Monday.

Meanwhile, security has been beefed up at the entrance of the palace of the Emir of Kano to avert breakdown of laws.

A team of security operatives was sighted at the traditional ruler’s palace moments after the removal of Sanusi.

They included men of the Nigeria Police and the Nigeria Security and Civil Defence Corps.

Sanusi, who was the 14th emir of Kano under the Fulani dynasty, was appointed as the Emir of Kano on June 8, 2014.

He was born on July 31, 1961, in Kano to a ruling class Fulani family of the Sullubawa clan.

Prior to his accession, Sanusi was an economist and banker.

He served as the Governor of the Central Bank of Nigeria from 2009 to 2014 and was suspended by President Goodluck Jonathan after he raised the alarm on the US$20 billion NNPC scandal.