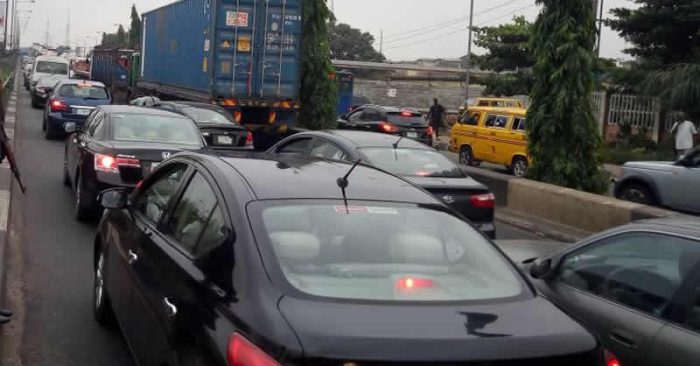 The Federal Government on Tuesday night shut the Alaka Bridge linking Eko Bridge in Lagos for repairs to prevent its total collapse, the News Agency of Nigeria (NAN) reported.

Officials from both Lagos State Ministry and Federal Ministry of Works and their Transportation counterparts reportedly converged on the bridge at about 9:15 p.m. on Tuesday for the emergency closure.

The Federal Controller of Works in Lagos, Mr Adedamola Kuti, told NAN in a telephone interview, that the emergency closure was to prevent total collapse of the bridge.

“We are all here closing the Alaka to Costain portion of the Eko Bridge because some bearings are bad.

“We just discovered that the bearings are broken and we are here to shut it down for the safety of motorists.

“We are shutting it down now so that we can carry out full investigations on the extent of damage to the bearings to begin the repairs,’’ Kuti said.

He explained that only Alaka flyover portion from Alaka to Costain section of the Eko Bridge was bad.

The Controller said that the traffic regulatory agencies were on ground to ensure that impact of gridlock as a result of the closure was minimized when commuters use the road on Wednesday morning.

He advised motorists going to Lagos Island to connect the Eko Bridge through the service lane at Alaka through Iponrin to Costain Bus Stop area to connect the bridge.

He also advised use of the National Theatre, as alternative route to connect the Eko Bridge on the other side.