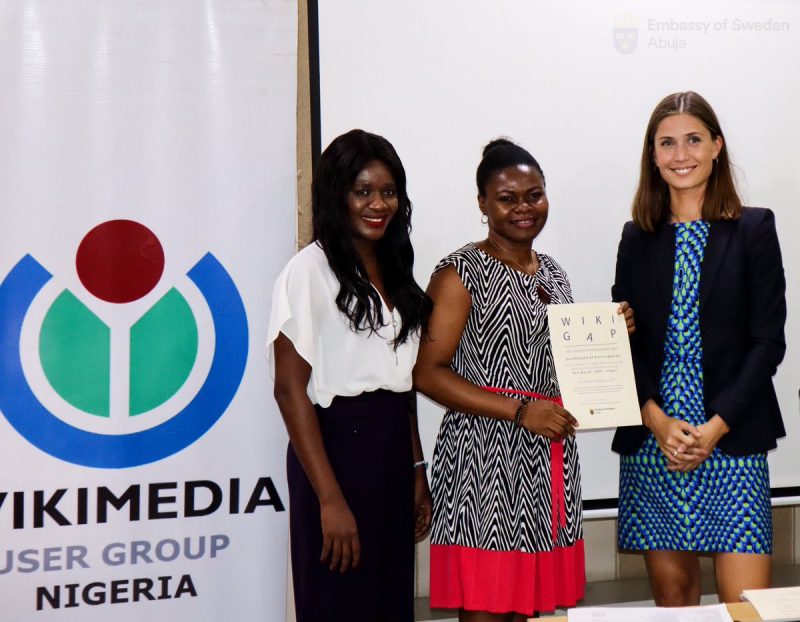 Fanny Nylander, Deputy head of Mission, Embassy of Sweden to Nigeria and participants from the Wikimedia empowerement in Lagos, Nigeria.

Nylander said that Wikipedia was the world’s largest online and user-generated encyclopedia which content influences and shaped how we see the world.

“But there’s a problem. Like the rest of the world, Wikipedia is far from gender equality.

“There are still four times more articles about men than there are about women, and nine out of 10 articles are written by men’’ She said.

She said that global WikiGap initiative was launched by the Swedish Ministry for Foreign Affairs and Wikimedia in March 2018.

She said that since then, edit-a-thons had been held in more than 60 countries, resulting in over 35,000 new and expanded Wikipedia articles about women actors, experts and role models in various fields.

Nylander said this year, WikiGap would take place in more than 30 countries globally in connection with international women’s day.

She expressed optimism that the empowerment would not only contribute to bridging the gender gap online but would have a positive influence on gender equality in the society as a whole.

Speaking, Mr Olusola Olaniyan, President, Wikimedia Nigeria Foundation said that the Sweden embassy was actually looking on how to bridge the gap.

Olaniyan said that one of the numerous ways they have highlighted was how to use content to bridge the content gap.

He said that the Sweden embassy globally every year come together to write articles about women to increase the content about women.

The president said that the event was organised to commemorate the international women’s day.

He said that Wikimedia feels that there was a huge gap that needed to be bridged.

He said that the gap made Wikimedia to train Nigerian female editors who would come together to write articles about women.

Olaniyan said that 30 women have been trained and soon they would be launching WikiNaija women which would focus on advocacy and digital inclusion.