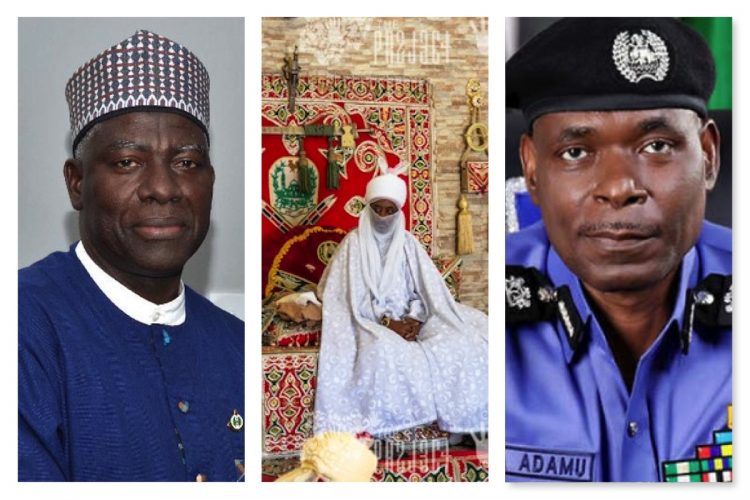 Bichi, Emir Sanusi and Adamu: Buhari must query those who carried out the illegal banishment of Sanusi

The emphatic denial by Kano’s attorney general that the government did not banish deposed Emir Muhammadu Sanusi II to Nasarawa state, immediately put two of Nigeria’s security chiefs on the spot.

These are the Director-general of the Department of State Services, Yusuf Magaji Bichi and the Inspector General of Police, Mohammed Adamu.

On whose authority did they banish Sanusi to rural Loko and later Awe, when the emir had preferred to go to Lagos, where he had spent decades of his life, including attending King’s College for his secondary education?.

President Buhari and the National Assembly need to find out why the security chiefs decided to humiliate Sanusi and send him into internal exile, in violation of Nigeria’s laws and the 1999 constitution that guarantees every citizen the right to liberty and the freedom of movement.

Senior lawyers and Sanusi’s lawyers have said the banishment was illegal and was based on an archaic, colonial law, that is no longer tenable in 2020 Nigeria.

Sanusi’s legal team had threatened to sue the Kano State Government on the purported banishment.

But Ibrahim Muktar, Kano State Attorney General, who spoke on Channels Television on Wednesday, said there was nowhere the Secretary to the State Government,who announced Sanusi’s dethronement on Monday, ever mentioned that the dethroned emir had been banished.

“You see, If you listen to the Secretary to the State Government when he was addressing the press on the issue of the removal of the emir from office, there was nowhere he said the emir was even banished from Kano State.

The question must be answered by the director-general of Department of State Services, Yusuf Magaji Bichi, an indigene of Kano State.

Did he forget the constitutional provisions in carrying out the illegal act? Or was he more moved by primordial and outmoded sentiments in banishing the emir to Nasarawa state?.

The police Inspector-general, Mohammed Adamu from Nasarawa state also need to explain why his men and the DSS decided to embarrass Nigeria in the eyes of the world by banishing Sanusi to Nasarawa. Afterall, the police helicopter was used to ferry Sanusi from Loko to Lafia, before he was moved to Awe, not too far away from the capital.

Were Bichi and Adamu not aware that the courts ruled as illegal the banishment to the same Nasarawa of Mustapha Jokolo, the deposed Emir of Gwandu in 2005?

Why repeat the egregious error?

The Sanusi case and the role of the police and DSS chiefs have all the ingredients of the atrocious step taken by former D~G of DSS, Lawan Daura in 2018 in sending armed and hooded DSS operatives to violate the National Assembly, all in the name of trying to secure the premises.

Just like acting President Yemi Osinbajo promptly acted to remove Lawan from office, President Buhari needs to shed his toga of aloofness by querying the DSS and police chiefs on why they exiled Sanusi in a degrading manner to Nasarawa, and even banned him from having visitors, as if he were their prisoner.

We want to end this commentary with the statement on Tuesday by Mr Abubakar Balarabe-Mahmoud, a Senior Advocate of Nigeria (SAN), and leader of the Sanusi legal team .

“We have not spoken to the Emir since yesterday(Monday), but we understand they are at their destination somewhere in a remote part of Nassarawa State after driving for nearly seven hours in the night and arrived at about 2.00 a.m., this morning.

“We understand the choice of location to detain Sanusi was intended to cause maximum trauma and distress. This again is illegal and unconstitutional.

“According to instructions we received from the Emir through his Chief of Staff, we are directed to take legal action to challenge the legality of his detention and banishment.

“We are of the firm view that this action is illegal and unconstitutional. Section 35 of our Constitution guarantees every citizen the right to personal liberty. The basis of the denial of personal liberty are set out clearly in this Section of the Constitution. None applies to the case of Sanusi.

“The archaic practice of banishment of deposed Emirs, a colonial practice has no basis under Nigerian law or Constitution. We are totally perplexed at the resort to this practice in present day Nigeria by its political leaders,” he said.

“The illegality of such practice was pronounced by the Court of Appeal in Attorney General Kebbi State vs. former Emir of Kwandu, Alhaji Al-Mustapha Jakolo and ors 2013 LPELR 22349/CA where the Court pronounced it as illegal and unconstitutional and gross violation of the rights of the Emir.

“We call on the authorities, in particular the Inspector General, the Director General of Department State Services and Attorney-General of the Federation and Minister of Justice to ensure the immediate release of Sanusi II so that he can be reunited with his family.

“We are concerned about his personal safety and security, and wish to call on all well meaning Nigerians and the International Community to bring their influence to bear to ensure that he regains his liberty immediately and to guaranty his safety and security.

“We, the legal team of the dethroned Emir, are working both in Kano and Abuja and unless he is released immediately, we will be taking appropriate legal action.”

Over to Aso Rock!