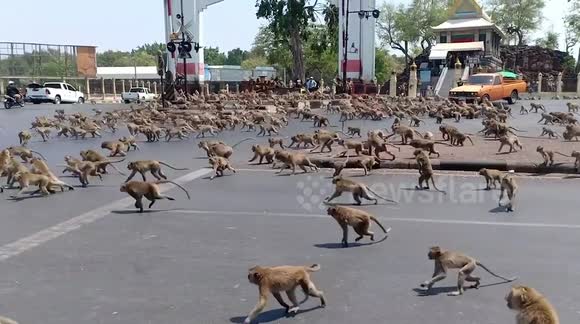 Thai media reported on Thursday that thousands of monkeys from three separate tribes commenced on an all-out war in the middle of a Thai city.

Footage of the monkey hordes running around and fighting each other in Lopburi city centre was widely shared on social media and published by Thai media.

The battle was between monkeys from different parts of the province.

One tribe claims the territory of a historic temple, another tribe inhabits a nearby shrine, and another typically roams around a food market down the street.

The report said the monkey fights broke out due to extremely hot weather conditions, which surpassed 40 degrees Celsius.

It added that a lack of food for the apes also aided the fight because of the lack of tourists over the past year and the country’s ongoing drought conditions.

Lopburi province, around 140 km north of Bangkok, is home to thousands of monkeys that typically roam around the city and have become the province’s main tourist attraction.

The Thairath report cited Lopburi local Beaw Aum-in, a 65-year old motorcycle taxi driver who has been hanging out with the monkeys for all his life, as saying that it was the first time he had ever seen such a large fight between them.

Thairath also reported that monkeys from Lopburi have been known to hitch on trains to pick fights with monkeys in Nakhon Sawan province, a further 140 km north of Lopburi.