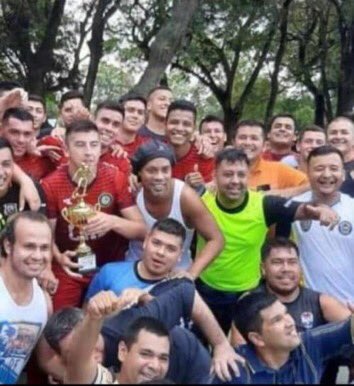 Even in retirement, or indeed incarceration, the silverware continues to roll in for FC Barcelona legend Ronaldinho.

Now, the 39-year-old can add a futsal trophy to the World Cup, Champions League, and Ballon d’Or, after helping his team come out on top in a tournament held within the Paraguayan maximum security prison he currently inhabits over the use of false documents.

As been widely reported, the triumphant outfit was also awarded a 15kg suckling pig for their 11-2 win, with conflicting accounts emerging over how many goals and assists the Brazilian racked up.

Some have it down as five and six in each facet respectively, while others contest that his involvement in the match wasn’t as dominant. Elsewhere, though, video footage has surfaced of at least one of his successful strikes.

However, matters worsen for Ronaldinho and his brother Roberto, who is also being held in the Asuncion prison.

Their third appeal for a transfer to house arrest turned down, as it was again deemed that the siblings pose a flight risk while Brazil does also not extradite its citizens.

It has been suggested that Brazil president Jair Bolsonaro, who appointed him an ambassador for tourism despite being legally unable to own a passport, may put pressure on the Paraguayan government to release his ally.

Thus far, the protests of Minister of Justice and Public Security Sergio Moro have fallen on deaf ears, and, as things stand, it is expected that Ronaldinho and Roberto could be jailed for at least six months until they face trial, Forbes reported.