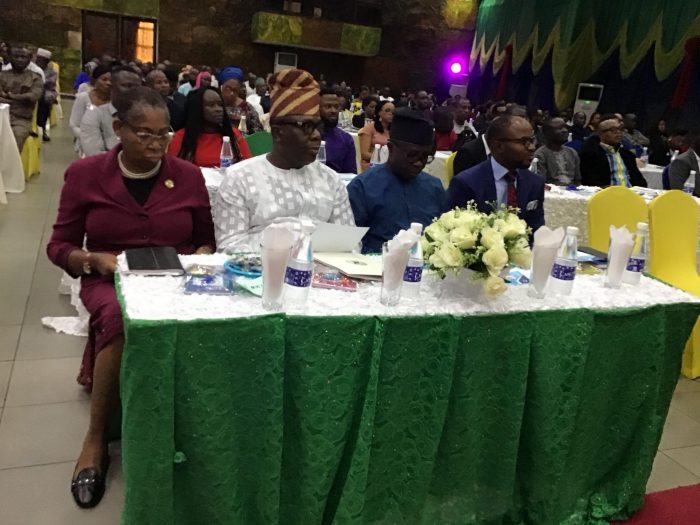 Commissioner for Home Affairs, Prince Anofiu Elegushi with key stakeholders at the event

The Lagos State Government at the weekend said it will overhaul laws on money lending in the state in a bid to make more effective and customers friendly.

Commissioner for Home Affairs, Prince Anofiu Elegushi spoke at Stakeholders’ Forum organised by the Ministry of Home Affairs on the need to examine the laws guiding the activities of money lenders in the State.

The event held at NECA House, CBD Ikeja was to intimate the Stakeholders on the proposed laws regulating money lenders activities in order to repose confidence in the industry.

According to Elegushi, the forum became necessary so as to deliberate on the proposed regulations and find a mutually beneficial ground.

“As regulators, we cannot be a judge in our own case, this is why we have called on all of you practitioners and would-be practitioners to look at the laws guiding our activities, discuss and agree on grey areas as they affect both the Regulators and Practitioners in the State,” he said.

The Commissioner also noted that some of the laws guiding the operations of money lending required total overhauling, while others had become obsolete and archaic, hence the need to have a new law and regulations that would have a friendly approach to the government, practitioners and the beneficiaries who constitute the larger picture of society.

Elegushi urged the stakeholders to make inputs and suggestions that would help in the formulation of policies and laws as the Ministry approached the State House of Assembly for a more robust and encompassing amendment on the laws on money lending.

He also reiterated the support of the administration of Governor Babajide Sanwo-Olu in creating an enabling environment for easy loan accessibility to the citizens with an emphasis on pragmatic strategies for achieving positive and cost effective results in grassroots financing which will invariably help in achieving the T.H.E.M.E.S Agenda in which ‘Making Lagos a 21st Century Economy’ can become a reality.

The Commissioner expressed the hope that the lessons derivable from the interaction would rub off on the practitioners bearing in mind that the small and medium enterprises were the key promoters of economic growth and that the key component for their success was the availability and provision of finance at little or no interest rate for their operations.

The Permanent Secretary, Ministry of Home Affairs, Mrs Adebunmi Adekanye in her welcome address stated that the meeting was important and timely as matters relating to finances could not be taken with levity.

According to her “This forum is aimed at providing a robust and fulfilled deliberation on the review of the law and other allied matters that will be of great benefits to the regulations, operations and also the borrowers so as to protect the interest of all Stakeholders in the industry.”

Part of the reasons for the forum, according to Adekanye, was to discuss and fine tune the processing measures that would go a long way in bringing sanity and a stress free application process in line with the T.H.E.M.E.S Agenda of the present Administration.

Taking the participants through an overview of money lenders activities in Lagos State, the Director, Home Affairs in the Ministry, Mrs. Olubunmi Fatinikun noted that the vision of Lagos State to become Africa’s Model Mega City and Global Economic and financial hub hinged upon Public-Private Partnership (PPP), Rule of Law, Transparency and Accountability, Good Governance and participatory planning, among others.

She stated that the huge formality associated with banks and micro finance banks pertaining to borrowing clearly necessitated the need for financial inter-mediation and assistance.

She noted that successive administration in the state saddled the ministry of Home Affairs with the responsibility of issuing money lender’s license to applicants in addition to drafting of a new laws to regulate, monitor, supervise, enforce and license money lender’s activities in the state and other connected matters.

Fatinikun opined that most times, there had been issues of some dubious operators who had gone to the extent of scamming unsuspecting borrowers leveraging on lack of instruments from appropriate authorities to escape the long arms of law.

She, therefore, stated that all money lenders operating in the state must obtain a valid license from the ministry for a smooth and legal operation of their businesses while advising borrowers to only patronize licensed money lenders.

Highlights of the laws to be reviewed includes, Creation of a Department in the Ministry of Home Affairs to deal with the issue of registration; issuance, enforcement, renewals, enquires and other assigned roles, Abolishment of Magistrate ordinance Form B and C for registration, advertisement for lenders, life span of license to have a 12-month duration, online lending among others.