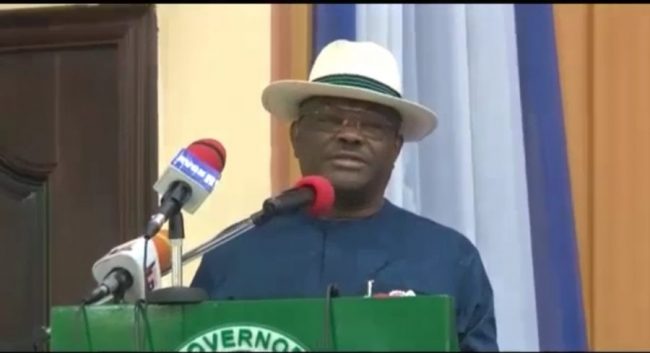 Rivers State Governor, Nyesom Ezenwo Wike has berated the Imo State Governor, Hope Uzodinma, for alleging that the PDP is responsible for the plot to remove Adams Oshiomhole as the National Chairman of the All Progressives Congress.

“Many of us, leaders of the party, are aware that those clamouring for the chairman’s removal are working with the PDP to destabilise the party,” Uzodinma told reporters on Saturday.

In an interview at the Government House Port Harcourt on Tuesday, Governor Wike said the comments credited to Senator Hope Uzodinma are baseless, untrue and unfortunate.

“I read that Senator Hope Uzodinma said that the PDP conspired to plot the attempted removal of APC National Chairman. That is an unfortunate lie.

“It is unfortunate that Senator Hope Uzodinma will have the temerity to make that false allegation. Hope Uzodinma was an APC agent while he was in PDP. That was why APC used him as an agent to support Ali Modu Sheriff, but they failed.

“APC does not mean well for Nigeria. It is a party of strange bedfellows merely formed to take over power.

“If Senator Uzodinma dares to make such false comments again about the PDP, we will tell the world about him.

“That he fraudulently took the mandate of PDP does not mean that PDP is weak. Hope Uzodinma lacks the capacity to discuss the PDP.”

Governor Wike also urged Nigerians to be vigilant and work towards protecting the Judiciary, adding that the APC has destroyed the Judiciary.

Governor Wike wondered why the Judiciary should allow leaders of the APC to toss it around as has been witnessed during the party’s internal crisis.

He decried the situation where the Court of Appeal granted a stay of execution on the suspension of the APC National Chairman, but the FCT High Court went ahead to declare another person the Acting National Chairman. He said only the National Executive Committee of political parties have such powers.

“I am not interested in what happens in the APC. But I am concerned with the Judiciary and its survival. “

He urged the Chief Justice of Nigeria to caution judges.

“With what the APC is doing today, we may not have the Judiciary and everyone will pay the price. The party is trying to destroy the hope of the common man,” he said.

Governor Wike regretted that the APC and her supporters attack the Judiciary when judgment is not in their favour.

He pointed out the attacks on Justice Mary Odili in the Bayelsa State Governorship matter.

The Governor said that the recent order by the wife of the member of a House of Representatives wherein she reaffirmed the freedom of the former Emir of Kano, was hailed, even though she was the wife of a PDP member.

He said that the APC is an association that was only concerned about the removal of former President Goodluck Jonathan.

He said that having removed Jonathan, APC has been unable to use power to the advantage of Nigerians.

The Governor wondered how a national official of the APC who resigned to contest the Deputy Governorship position in Rivers State, would still go to court to seek to be Acting National Chairman.

Governor Wike, however, agreed with the Former Governor of Lagos State that the struggle in the APC is about 2023.

“I agree with the former Lagos State Governor, Senator Bola Tinubu that the crisis in APC is about 2023. Everyone wants to be President or Vice President. This virus is indeed worse than coronavirus,” he said.