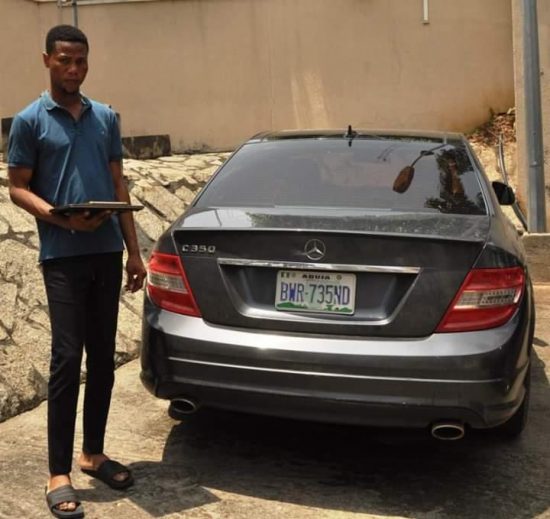 Ken Odiase, an internet fraudster, has been convicted and sentenced by Justice C. N. Oji of the FCT, High Court in Abuja.

Odiase, alias Phillip Iowell, was prosecuted by the Abuja Zonal Office of the Economic and Financial Crimes Commission, EFCC.

Odiase who pleaded guilty was first arraigned on October 15, 2019 on a one count charge bordering on computer related fraud and obtaining money by false pretence.

Following Odiase’s plea of guilt, the court convicted and sentenced him to a one-month imprisonment with an option of a fine of N150,000. The court also ordered him to forfeit all the proceeds of crime to the Federal Government.

Ken was amongst the fraudsters arrested by the anti-graft agency on Thursday, September 26, 2019 at No 5 Arbe-Saibra Dantata Estate, Kubwa, Abuja, following intelligence. Items recovered during the raid included mobile phones, laptop computers and a Mercedes C350 worth N3.5m (Three Million Five Hundred Naira) only.

Investigations revealed that Ken lured his victims mainly based in United States of America, USA, via a Facebook profile with the name: Sergeant Phillip Iowell under the pretense of being a military personnel working with the USA Army on a mission in Syria.

The monies were wired to him through Western Union into his First Bank account in Nigeria.