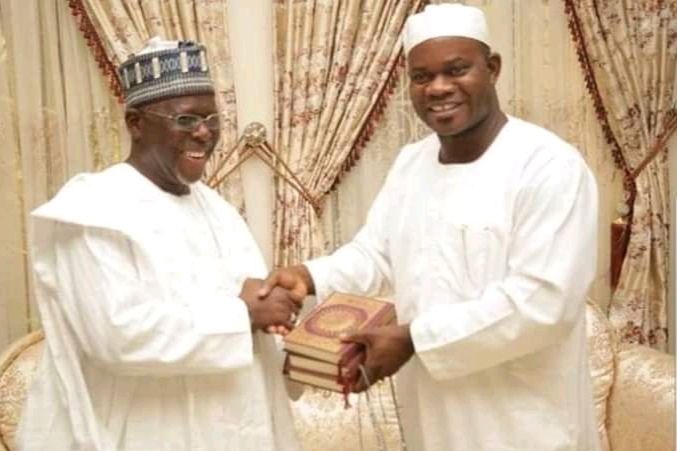 Former Governor of Kogi State, Capt Idris Wada on Sunday paid a condolence visit on Governor Yahaya Bello over the death of his mother, Hajia Hauwau Oziohu Bello who passed on recently at the age of 101.

The former governor was accompanied by his former Chief of Staff, Pharm Nasiru Yunusa; Barrister Raji; his son, Hassan Wada; Dr Ocholi Abdulrahman Hassan and Dr Onoja Sam. This was disclosed in a statement by Onogwu Mohammed, Chief Press Secretary to Governor Bello.

Wada said his visit was to condole with the governor over the death of his mother and to equally pray for the repose of her soul.

“I am here this morning with a very heavy heart to pay condolence to you over the death of your beloved mother, Hajia Hauwau Oziohu Bello.

“I think the loss of a mother is the most painful death in the family. Mothers are so special in the family for the care and love they provide but death is inevitable and when it comes, we say Inna LILLAHI WAINNA ILLAIHI raji’un”, he said.

Wada offered prayers for the peaceful repose of the soul of the late Matriarch and urged the governor to remain strong even in moment of grief.

“We pray to Allah to grant Mama’s soul the most beautiful part of Aljanatu. Allah will stand by you. He will continue to be with you and your family. We urge you to remain strong”, Wada said.

In his response, the governor expressed profound appreciation to the former governor for finding time to pay condolence visit to him over the death of his mother.

He said his late mother was a mother, a lover of children and a mother of the community who stood for fairness, justice and equity.

He said his late mother brought them up in the right way and taught his children respect for elders and necessity to form unity and build bridges.

He said when his mother was kidnapped in 2012, the former Governor and his government played their own roles for the release of his mother, noting that he would continue to fight insecurity in the state .

While referring to the former governor as his father, Bello thanked Wada for the show of love, brotherliness and unity he has demonstrated all the time.